One of the largest severe weather outbreak so far this year occurred this week as powerful winds, large hail and heavy rains pummeled the Plains and parts of the Ohio Valley over the course of several days.
Read Story

Share |
One of the largest severe weather outbreak so far this year occurred this week as powerful winds, large hail and heavy rains pummeled the Plains and parts of the Ohio Valley over the course of several days.
According to the National Weather Service's Storm Prediction Center, there were 39 tornado reports, over 310 high wind reports and more than 240 hail reports from Tuesday and Wednesday combined.
In Missouri, thunderstorm winds gusted to near 80 mph in Kimberling City and near 90 mph around Carthage. Damage was reported in both locations Wednesday morning.

ADVERTISING
Flash flooding was also a problem from parts of the Plains to the Gulf Coast this week. In Dover, Kansas, a family of nine had to be rescued after floodwaters surrounded their home.
At least 12 people were injured in Oklahoma due to Tuesday's storms, while a 62-year-old woman was killed after a tree fell on her home in the Houston area early Wednesday, the Associated Press reported. Multiple tornadoes also caused damage by overturning cars and shredding roofs north of Dallas late Tuesday, the AP said.
Another round of severe thunderstorms followed quickly after the midweek outbreak, spreading across portions of Oklahoma and Texas during late week. 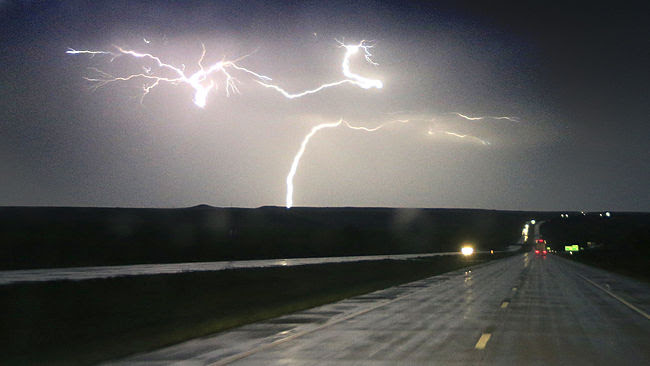 Lightning strikes along Interstate 70 near Junction City, Kan., Tuesday, April 26, 2016. Thunderstorms bearing hail as big as grapefruit and winds approaching hurricane strength lashed portions of the Great Plains on Tuesday. (AP Photo/Orlin Wagner)
The World Meteorological Organization announced on Monday that it's retiring storm names Erika, Joaquin and Patricia due to their destructive nature during the 2015 season.
The 2015 hurricane names are scheduled to be used next in 2021. However, the WMO said Erika will be replaced with "Elsa," Joaquin with "Julian" and Patricia with "Pamela."
Erika and Joaquin both developed in the Atlantic Ocean, while powerful Patricia formed in the North Pacific.
RELATED:
California drought: Stormy El Nino winter has some calling for end to strict water usage restrictions
Watch viral videos on the AccuWeather Video Wall
Nonprofit organization rolls out plan for disaster-resistant homes in Tornado Alley
On Tuesday, the United Nations held a news conference in response to the strong El Niño that has impacted 60 million people around the world through droughts, floods and other types of extreme weather.
The U.N. is calling on the international community to act now to address urgent humanitarian needs, according to a news article on its website. Some of the harshest impacts are being felt in the world's poorest locations.
During the press conference, U.N. Under-Secretary-General for Humanitarian Affairs and Emergency Relief Coordinator Stephen O'Brien said the current El Niño is resulting in life-threatening weather extremes around the world, including Ethiopia's worst drought in 50 years.
The U.N. Office for the Coordination of Community Affairs (OCHA) said response plans for 13 countries have been completed and those plans request up to $3.6 billion for food and agricultural support as well as nutrition, health and emergency water and sanitation needs.
However, additional funding is needed to combat El Niño-related issues, and assistance efforts must be increased before worst-case scenarios begin to unfold, according to O'Brien.
"We collectively face an alarming funding gap of over $2.2 billion for the provision of food, clean water, basic medicine and seeds to make sure farmers do not lose their next harvest," O 'Brien said. "This figure is expected to grow as additional plans are concluded and new needs assessments are finalized, notably in Ethiopia and Southern Africa."
National governments, the U.N., regional organizations and non-governmental organizations are already coordinating to address needs. However, resources are still lacking, according to the U.N.
"We must take urgent action now to help people whose livelihoods and whose entire way of life is threatened - even their ability to survive," O'Brien said.
Several AccuWeather meteorologists and staff writers contributed content to this article.
Posted by intuitivefred888 at 10:45 AM