US Suicide Rate Surges to a 30-Year High 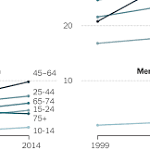 The lack of religion directly relates to this article too I believe. If you don't believe in anything: Why Live at all?

If there is NO meaning to life at all, why live?

What I'm saying here is people who believe in

nothing appear to be the first to either choose to die

Or to not care enough to stay alive.

US Suicide Rate Surges to a 30-Year High

WASHINGTON - Suicide in the United States has surged to the highest levels in nearly 30 years, a federal data analysis has found, with increases in every age group except older adults.

WASHINGTON — Suicide in the United States has surged to the highest levels in nearly 30 years, a federal data analysis has found, with increases in every age group except older adults. The rise was particularly steep for women. It was also substantial among middle-aged Americans, sending a signal of deep anguish from a group whose suicide rates had been stable or falling since the 1950s.
The suicide rate for middle-aged women, ages 45 to 64, jumped by 63 percent over the period of the study, while it rose by 43 percent for men in that age range, the sharpest increase for males of any age. The overall suicide rate rose by 24 percent from 1999 to 2014, according to the National Center for Health Statistics, which released the study on Friday.
The increases were so widespread that they lifted the nation’s suicide rate to 13 per 100,000 people, the highest since 1986. The rate rose by 2 percent a year starting in 2006, double the annual rise in the earlier period of the study. In all, 42,773 people died from suicide in 2014, compared with 29,199 in 1999.
“It’s really stunning to see such a large increase in suicide rates affecting virtually every age group,” said Katherine Hempstead, senior adviser for health care at the Robert Wood Johnson Foundation, who has identified a link between suicides in middle age and rising rates of distress about jobs and personal finances.
Researchers also found an alarming increase among girls 10 to 14, whose suicide rate, while still very low, had tripled. The number of girls who killed themselves rose to 150 in 2014 from 50 in 1999. “This one certainly jumped out,” said Sally Curtin, a statistician at the center and an author of the report.
American Indians had the sharpest rise of all racial and ethnic groups, with rates rising by 89 percent for women and 38 percent for men. White middle-aged women had an increase of 80 percent.
The rate declined for just one racial group: black men. And it declined for only one age group: men and women over 75.
The data analysis provided fresh evidence of suffering among white Americans. Recent research has highlighted the plight of less educated whites, showing surges in deaths from drug overdoses, suicides, liver disease and alcohol poisoning, particularly among those with a high school education or less. The new report did not break down suicide rates by education, but researchers who reviewed the analysis said the patterns in age and race were consistent with that recent research and painted a picture of desperation for many in American society.
Continue reading the main story

“This is part of the larger emerging pattern of evidence of the links between poverty, hopelessness and health,” said Robert D. Putnam, a professor of public policy at Harvard and the author of “Our Kids,” an investigation of new class divisions in America.
The rise in suicide rates has happened slowly over many years. Federal health researchers said they chose 1999 as the start of the period they studied because it was a low point in the national suicide rate and they wanted to cover the full period of its recent sustained rise.
The federal health agency’s last major report on suicide, released in 2013, noted a sharp increase in suicide among 35- to 64-year-olds. But the rates have risen even more since then — up by 7 percent for the entire population since 2010, the end of the last study period — and federal researchers said they issued the new report to draw attention to the issue.
Policy makers say efforts to prevent suicide across the country are spotty. While some hospitals and health systems screen for suicidal thinking and operate good treatment programs, many do not.
“We have more and more effective treatments, but we have to figure out how to bake them into health care systems so they are used more automatically,” said Dr. Jane Pearson, chairwoman of the National Institute of Mental Health’s Suicide Research Consortium, which oversees the National Institutes of Health funding for suicide prevention research. “We’ve got bits and pieces, but we haven’t really put them all together yet.”
She noted that while N.I.H. funding for suicide prevention projects had been relatively flat — rising to $25 million in 2016 from $22 million in 2012 — it was a small fraction of funding for research of mental illnesses, including mood disorders like depression.
The new federal analysis noted that the methods of suicide were changing. About one in four suicides in 2014 involved suffocation, which includes hanging and strangulation, compared with fewer than one in five in 1999. Suffocation deaths are harder to prevent because nearly anyone has access to the means, Ms. Hempstead said. And while the share of suicides involving guns declined — guns went from being involved in 37 percent of female suicides to 31 percent, and from 62 percent to 55 percent for men — the total number of gun suicides increased..
The question of what has driven the increases is unresolved, leaving experts to muse on the reasons.
Julie Phillips, a professor of sociology at Rutgers who has studied suicide among middle-aged Americans, said social changes could be raising the risks. Marriage rates have declined, particularly among less educated Americans, while divorce rates have risen, leading to increased social isolation, she said. She calculated that in 2005, unmarried middle-aged men were 3.5 times more likely than married men to die from suicide, and their female counterparts were as much as 2.8 times more likely to kill themselves. The divorce rate has doubled for middle-aged and older adults since the 1990s, she said.
Disappointed expectations of social and economic well-being among less educated white men from the baby-boom generation may also be playing a role, she said. They grew up in an era that valued “masculinity and self-reliance” — characteristics that could get in the way of asking for help.
“It appears this group isn’t seeking help but rather turning to self-destructive means of dealing with their despair,” Professor Phillips said.
Another possible explanation: an economy that has eaten away at the prospects of families on the lower rungs of the income ladder.
Dr. Alex Crosby, an epidemiologist at the Centers for Disease Control and Prevention, said he had studied the association between economic downturns and suicide going back to the 1920s and found that suicide was highest when the economy was weak. One of the highest rates in the country’s modern history, he said, was in 1932, during the Great Depression, when the rate was 22.1 per 100,000, about 70 percent higher than in 2014.
“There was a consistent pattern,” he said, which held for all ages between 25 and 64. “When the economy got worse, suicides went up, and when it got better, they went down.”
But other experts pointed out that the unemployment rate had been declining in the latter period of the study, and questioned how important the economy was to suicide.
The gap in suicide rates for men and women has narrowed because women’s rates are increasing faster than men’s. But men still kill themselves at a rate 3.6 times that of women. Though suicide rates for older adults fell over the period of the study, men over 75 still have the highest suicide rate of any age group — 38.8 per 100,000 in 2014, compared with just four per 100,000 for their female counterparts.
Posted by intuitivefred888 at 9:35 AM

Email ThisBlogThis!Share to TwitterShare to FacebookShare to Pinterest
Labels: US Suicide Rate Surges to a 30-Year High