I was rereading something I had written here at this site and realized "Riding Shotgun" is something an American would understand because of our culture but might be a confusing slang word likely from the 19th century U.S. So, I thought I would share with people outside of America what this means. Also, it might be interesting to Americans too where this concept came from:

From Wikipedia, the free encyclopedia
For other uses, see Riding shotgun (disambiguation). 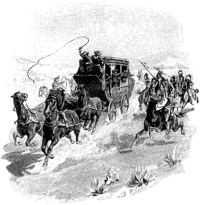 Riding shotgun. The driver is holding the whip with the shotgun messenger on his left.
Riding shotgun refers to the practice of sitting alongside the driver in a moving vehicle. The phrase has been used to mean giving actual or figurative support or aid to someone in a situation or project.[1]

The expression "riding shotgun" is derived from "shotgun messenger", a colloquial term for "express messenger", in the days of stagecoach travel the person in the position next to the driver. However, apparently the phrase "riding shotgun" was not coined until 1919.[2] It was later used in print and especially film depiction of stagecoaches and wagons in the Old West in danger of being robbed or attacked by bandits. A special armed employee of the express service using the stage for transportation of bullion or cash would sit beside the driver, carrying a short shotgun (or alternatively a rifle),[citation needed] to provide an armed response in case of threat to the cargo, which was usually a strongbox. Absence of an armed person in that position often signaled that the stage was not carrying a strongbox, but only passengers.[3]

More recently, the term has been applied to a game, usually played by groups of friends to determine who rides beside the driver in a car. Typically, this involves claiming the right to ride shotgun by being the first person to call out "shotgun". While there are many other rules for the game, such as a requirement that the vehicle be in sight, nearly all players agree that the game may only begin on the way to the car.[4][5] In addition, a number of humorous rules for calling shotgun has been developed by organizations and individuals (for example, the "survival of the fittest rule").[6]