Body of 'Russian Rambo,' who called in airstrike on own position, flown home

(CNN)Alexander Prokhorenko was battling to free the ancient Syrian city of Palmyra. But he found himself surrounded by Islamic militants. He feared that he would be captured, tortured, killed and his body mutilated.
He preferred to die with dignity.
So he called in an airstrike on his own position.
That was his contribution to liberating Palmyra from ISIS terrorists -- and to Russian glory. It was also his end. He was 25 years old.
His death was announced March 24.
And so the legend begins.
MORE: Destroyed Palmyra arch resurrected in London

School may be named after Prokhorenko

The body of Alexander Prokhorenko, the man who's now being called the "Russian Rambo," was flown back home to Moscow this week, to be be greeted by his wife, Katya, who is pregnant with their first child.
All of this is according to Sputnik, the Russian state news agency. 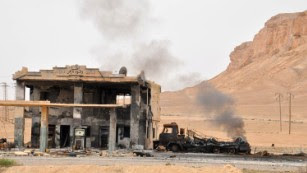 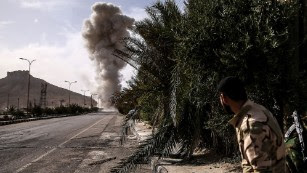 In accordance with an order from Russian President Vladimir Putin, Prokhorenko has, posthumously, been awarded the title of Hero of the Russian Federation, Sputnik reported.
A teacher at Gorodetskoy Middle School, which he attended, said Prokhorenko was a wonderful student, and the school won many competitions because of his participation.
And now his final act ...
"It is a real act of bravery that we will tell our pupils about," said Nadezhda Rusinova, a teacher at the school, as quoted by Sputnik. "After all, order an airstrike on yourself is something that not everybody would be able to do."
She said that she and others wanted now to name the Gorodetskoy Middle School after Prokhorenko, Sputnik reported.
MORE: Syrian truce 'hanging by a thread'

Palmyra has since been liberated from ISIS' grip.
On March 14 -- at least 10 days before Prokhorenko's death -- Putin ordered the withdrawal from Syria of "most" of Russia's military contingent there. The Russian troops were there, Moscow said, to fight terrorists such as ISIS, but many observers saw the Russian presence as propping up the regime of Syrian President Bashar al-Assad. 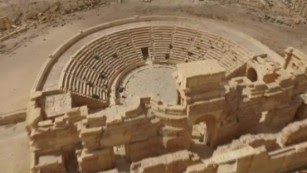 Restoring priceless ruins damaged by ISIS 02:21
The deployment proved costly for Russia. On October 31, little more than a month after the deployment was announced, a Russia-bound passenger plane was brought down over Egypt's Sinai peninsula, killing all 224 people on board.
Investigators believe the plane was blown up by a bomb smuggled on board at its departure point, the Egyptian resort of Sharm el-Sheikh. The local affiliate of ISIS claimed responsibility for the act.
And on November 24, a Russian warplane that both Turkey and the United States said had strayed from Syria into Turkish airspace was shot down by Turkey.
Relations between Russia and Turkey -- and between Putin and Turkish President Recep Tayyip Erdogan -- have not recovered from that incident.
OPINION: Don't be fooled by Putin's 'withdrawal'

Email ThisBlogThis!Share to TwitterShare to FacebookShare to Pinterest
Labels: 'Russian Rambo' is honored