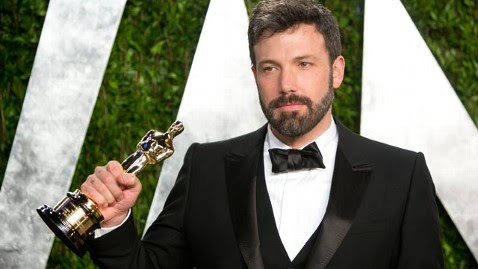 (Adrian Sanchez-Gonzalez/AFP/Getty Images)
Ben Affleck is now as clean-shaven as the Oscar statuette he won Sunday night when his film “Argo” was named best picture at the Academy Awards.
Affleck grew a beard for the movie and reportedly decided to keep it for good luck.  The “Argo” director shaved off the beard in a hallway outside a bathroom during an Oscar after-party at Craig’s restaurant in Los Angeles, E! News reported.  Affleck lost the beard to mark the end of a chapter and a number of people reportedly took turns shaving off his winning facial hair.
PHOTOS: Weird Celebrity Facial Hair
Affleck was snubbed in the directing category at the Oscars but humbly accepted the best picture award as one of the three producers on the film. He thanked Steven Spielberg and the other best picture nominees and his wife Jennifer Garner for “working on our marriage.”
“It’s good, it’s work,” he said, adding, “but there’s no one I’d rather work with.”
Acknowledging his last Oscar win, as a screenwriter for “Good Will Hunting,” Affleck said, “I was really just a kid. I never thought I would be back here.”
Affleck used Oscars night as an opportunity to join Instagram. His first post showed him answering questions on the red carpet with the caption, “The last leg of an unbelievable journey. Thanks to the amazing cast, crew and fans that got us here. #Oscars.”
SEE MORE: Oscars 2013: Ben Affleck’s ‘Argo’ Wins Best Picture