Kerry Vows Not to Leave Syria Rebels Dangling in the Wind

Kerry Vows Not to Leave Syria Rebels 'Dangling in the Wind'

BERLIN - Secretary of State John Kerry said on Monday that the Obama administration has been considering new steps to increase support for the Syrian opposition and hasten the departure of President Bashar al-Assad and that some of them would be ...
Syria opposition will reportedly attend Rome meeting
Syria opposition to join Rome talks after foreign aid pledge - by Suzanne Kianpour
John Kerry 'listening tour' focuses on Syria
Advertise on NYTimes.com

Kerry Vows Not to Leave Syria Rebels ‘Dangling in the Wind’ 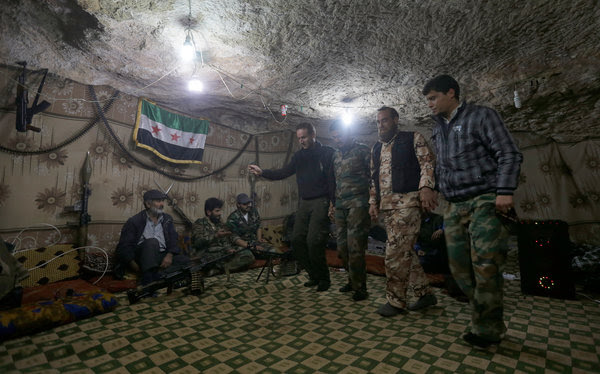 BERLIN — Secretary of State John Kerry said on Monday that the Obama administration has been considering new steps to increase support for the Syrian opposition and hasten the departure of President Bashar al-Assad and that some of them would be decided at an international conference in Rome this week.

Coverage of the Conflict in Syria

Follow @nytimesworld for international breaking news and headlines.
Twitter List: Reporters and Editors
“We are determined that the Syrian opposition is not going to be dangling in the wind wondering where the support is or if it’s coming,” Mr. Kerry said at a news conference in London. “And we are determined to change the calculation on the ground for President Assad.”
Mr. Kerry’s comments came amid diplomatic maneuvering and an unusual White House intervention over the Rome meeting, scheduled for Thursday.
After the Syrian opposition signaled that it would boycott the Rome conference to protest what it sees as negligible help from Western nations, Vice President Joseph R. Biden Jr. and Mr. Kerry called Moaz al-Khatib, the leader of the Syrian opposition coalition, and persuaded him to attend.
American officials have said that their goal in supporting the Syrian resistance is to build up its leverage in the hope that Mr. Assad will agree to yield power and a political transition can be negotiated to end the nearly two-year-old conflict.
In Moscow, however, Syria’s foreign minister, Walid al-Moallem, appeared to be making a competing initiative. In a statement during a visit to Russia, which has been one of the Assad government’s main backers, Mr. Moallem said that Syrian authorities were “ready for a dialogue with anyone who’s willing, even with those who carry arms.”
It was the first time that a high-ranking Syrian official had signaled that the government is open to talking with Syrian rebels who have taken up weapons against the armed forces.
It was unclear whether Mr. Moallem’s offer came with caveats, such as a precondition that the Syrian rebels must disarm first. More fundamentally, if the aim of Mr. Moallem’s offer was to achieve a cease-fire while perpetuating Mr. Assad’s hold on power it would be fundamentally at odds with the demand of the opposition that the Syrian leader be ousted.
Mr. Kerry was skeptical of Mr. Moallem’s intentions.
“What has happened in Aleppo in the last days is unacceptable,” Mr. Kerry said, referring to the Scud missile attacks the Assad government directed at the city last week. “It’s pretty hard to understand how, when you see these Scuds falling on the innocent people of Aleppo, it’s possible to take their notion that they’re ready to have a dialogue very seriously.”
London was the first stop on Mr. Kerry’s nine-nation tour, and Syria figured prominently in his discussions with William Hague, the British foreign secretary, who sent a strong message that more had to be done to support the Syrian opposition because the possibility of a political solution was “blocked off.”
“Our policy cannot stay static as the weeks go by,” Mr. Hague said at a joint news conference with Mr. Kerry. “It will have to change and develop.”
The European Union agreed to a British proposal that nonlethal assistance could be sent to armed groups inside Syria. Discussions were now under way among European nations to determine just what sort of aid could be sent, but some American officials had said it might include night-vision equipment or armored cars.
Mr. Kerry declined to say whether the United States might also send nonlethal aid to armed factions fighting Mr. Assad, saying that a variety of ideas was under discussion.
“We are not coming to Rome simply to talk,” he said. “We are coming to Rome to make a decision about next steps and perhaps even other options that may or may not be discussed further after that.”
Mr. Obama last year rebuffed a proposal from the C.I.A., State Department and Pentagon that the United States train and arm a cadre of Syrian rebel fighters.
After his meetings in Britain, Mr. Kerry flew to Germany for meetings on Tuesday with German officials and Sergey V. Lavrov, the Russian foreign minister.
The United States has sought Russia’s help in facilitating talks on a transitional government in Syria, but the American effort to reach out to the Russians failed last year when the Kremlin balked at the demand that Mr. Assad’s departure had to be one of the results of any negotiation.
Among the factions of the Syrian coalition, the debate is not over whether Mr. Assad must go but whether his departure is a precondition for talks.
On Jan. 30, Sheik Khatib floated the idea of negotiations with members of the government not directly involved in the crackdown. But many in the coalition remain skeptical of talks with the government and see them as a way for Mr. Assad to buy time.
On Monday, Samir Nachar, a member of the coalition, said that Sheik Khatib had met in the past week with Muhammad Hamsho, a prominent Syrian businessman who is close to Maher al-Assad, the president’s brother who leads the army’s feared Fourth Division, and a frontman for many Assad family enterprises.
Mr. Nachar said that Sheik Khatib had briefed him and other coalition members on the recent meeting, which he said had been initiated by Mr. Hamsho.
“Hamsho asked to meet Moaz al-Khatib and the latter agreed,” Mr. Nachar said in an interview. “The meeting did take place, yes.” He said Sheik Khatib had refrained from going into detail.
Mr. Hamsho is one of several Syrian figures on whom the United States has imposed sanctions since Mr. Assad’s repression of a peaceful protest movement that began in March 2011 and has since evolved into a civil war.
Gen. Selim Idriss, the leader of the Free Syrian Army, the main rebel fighter group, said that a cessation of violence by the government was “the bottom line” for rebels before any talks. In remarks to Al-Arabyia, a Saudi-backed news Web site, he also said, “There needs to be a clear decision on the resignation of the head of the criminal gang Bashar Assad, and for those who participated in the killing of the Syrian people to be put on trial.”

Email ThisBlogThis!Share to TwitterShare to FacebookShare to Pinterest
Labels: Kerry Vows Not to Leave Syria Rebels 'Dangling in the Wind'