Fed backs away from asset buying

The US Federal Reserve is backing away from open-ended asset purchases as officials grow nervous about the dangers of a bigger balance sheet.
Stocks Fall After Fed Minutes, Dow Below 14000; Vix Up 15%
Fed minutes show concerns about bond purchases
Here Comes FOMC Minutes ... - by Matthew Boesler

Stocks traded near session lows in the final hour of trading Wednesday following the Federal Reserve's meeting minutes and as investors took a breather a day after all three major averages closed at fresh multi-year highs.
"The selloff started after the Fed minutes–the minutes signaled that the Fed may not continue its bond-buying program down the road," said Keith Bliss, senior vice president at Cuttone & Co. "People have been looking for excuses to sell, but we're going to need a few more days to confirm if this is an actual pullback."
The Dow Jones Industrial Average dropped near session lows, led by Bank of America and Alcoa.
The S&P 500 and the Nasdaq also added to their losses. The CBOE Volatility Index (VIX), widely considered the best gauge of fear in the market, jumped above 13.
Most key S&P sectors turned lower, led by materials and energy. 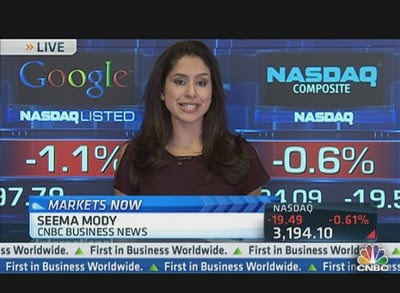 Play Video
Nasdaq: Near a 12-Year High
CNBC's Seema Mody reports the Nasdaq closed above 3,200 for the first time in 12 years.
Minutes from the Fed's latest meeting showed that policymakers remain divided on the timing and amount of asset purchases, with some members saying that the bond buying program may need to end prior to the achievement of the central bank's previously announced goal of improvement in employment.
In January, policymakers voted to keep its QE3 policy, at a $85 billion monthly pace, while committing to hold interest rates near zero until unemployment reaches 6.5 percent.
"If the economic numbers continue to be good or OK, [the Fed] will try to phase out this asset purchase plan, so I don't think they're going to continue to buy $85 billion a month all the way through December and sometime in 2014, we might see our first rate hike," said David Kelly, chief global strategist at JPMorgan Funds. "[But for now,] this is pretty positive for the equity market—...the Fed feels good about the economy and is committed to keeping rates low."
So far, the Dow and S&P 500 have gained an impressive 7 percent since the beginning of the year. The S&P 500 is on pace for its eight-straight weekly gain. The Dow within 1 percent of its all-time closing high of 14,164.53 hit on October 9, 2007.
(Read More: When Will This Big Pullback Finally Happen?)
"We're not surprised to see the market take a bit of a breather," said Cam Albright, director of asset allocation at Wilmington Trust Advisors. "We still like owning stocks—if you look out another two to three quarters, it's still not a bad picture—economic growth will be in the 2 to 2.5 percent range, China will avoid it hard landing, fiscal issues will get further resolved, Europe will be more stable, and the Fed will continue to support the market."
(Read More: Cramer: There's a 'Great Schism' in This Market) 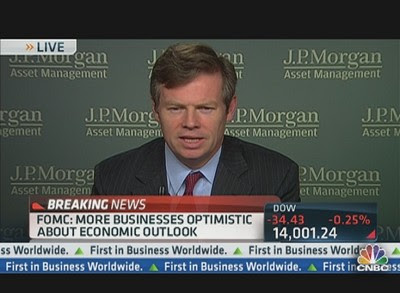 Play Video
FOMC: Federal Government Spending Dropped
Breaking down the latest Fed minutes,with JPMorgan Funds' David Kelly.
Meanwhile, Office Depot and OfficeMax announced a deal, after a morning filled with confusion and false starts. The office suppliers said the new company would be valued at nearly $18 billion. Shares of both companies slumped following the announcement. Earlier this morning, the original terms were announced prematurely in Office Depot's fourth-quarter earnings release, according to the New York Times.
Apple traded lower amid news that major supplier Foxconn Technology placed a hiring freeze on its largest plant in Shenzhen. Apple shares have plunged more than 35 percent since hitting an all-time high last September. Meanwhile, UBS said Foxconn's freeze may be attributable to Hewlett-Packardinstead of Apple. (Read More: No Opportunity In Apple: Terranova)
"We are forecasting a 12 percent year-over-year PC revenue decline for HP in the quarter to be announced tomorrow (during the company's earnings release)," wrote UBS analyst Steven Milunovich. "[On Tuesday] Dell indicated that PC demand and pricing remain difficult. In addition, we are concerned about printer demand and that the declines in printer hardware shipments will begin to affect supplies revenue over the next few quarters."
Among earnings, Toll Brothers declined after the luxury homebuilder posted quarterly results that missed expectations, due to lower selling prices and higher costs.
Garmin tumbled to lead the S&P 500 laggards after the GPS maker posted weaker-than-expected earnings and forecast full-year results below Wall Street estimates.
Tesla and Cheesecake Factory are among notable companies slated to post earnings after the closing bell.
Yahoo announced it is rolling out a new look for its website over the next few days. The newsfeed format containing stories, pictures or video will be similar to social-media feeds on Facebook and Twitter.
On the economic front, housing starts tumbled 8.5 percent in January, though new permits for construction jumped to a 4-1/2 year high, according to the Commerce Department. Meanwhile, producer prices rose for the first time in four months in January, according to the Labor Department. (Read More: CNBC Explains: What Are 'Housing Starts'?)
(Read More: Pisani: Is Housing Slowing Down?)
Weekly mortgage applications declined for a second week as refinancing and loan requests slipped last week, according to the Mortgage Bankers Association.
"Housing is going to continue to do fairly well this year and the spring selling season in April and May will be the critical months to confirm we've got a good recovery on the way," said Albright.
—By CNBC's JeeYeon Park (Follow JeeYeon on Twitter: @JeeYeonParkCNBC)

end quote from:
Stocks Fall After Fed Minutes, Dow Below 14000
If the FED is going to back away from Asset buying this will change the dynamics of buying stocks in the U.S. Stock market. Research will be more important than ever to make useful purchases.
Posted by intuitivefred888 at 12:53 PM

Email ThisBlogThis!Share to TwitterShare to FacebookShare to Pinterest
Labels: Dow Below 14000, Stocks Fall After Fed Minutes

You might want to check this technical analysis program: http://www.cognitum-research.com/en/wave-explorer