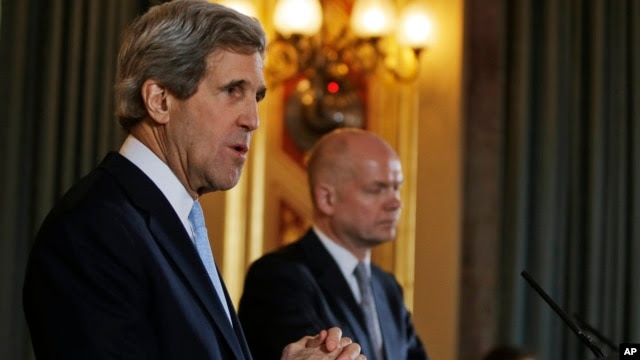 TEXT SIZE
Al Pessin
LONDON — U.S. Secretary of State John Kerry has sent a stern warning to both Iran and Syria, telling the governments of both countries they will have to embrace change or suffer the consequences.

Kerry spoke Monday during a news conference with British Foreign Secretary William Hague in London, the first stop of his first foreign trip as U.S. secretary of state.

Kerry called on Iran to negotiate in good faith at talks with the international contact group starting Tuesday, saying time is running out for a diplomatic solution to the standoff over its nuclear program.

“The window for a diplomatic solution simply cannot, by definition, remain open forever. But it is open today," he said. "It is open now and there is still time. But there is only time if Iran makes the decision to come to the table and to negotiate in good faith.”

Iranian negotiators will sit down Tuesday with diplomats from the five permanent Security Council members and Germany in Kazakhstan.

Iran says its nuclear program is for peaceful purposes, but many nations around the world are concerned it is actually aimed at building an arsenal of nuclear bombs.

"An Iran with a nuclear weapon, in that region, and given all that has happened, is simply unacceptable," Kerry said. "And we have stated that they will not obtain a nuclear weapon.”

Kerry said the United States goes to this week’s talks prepared to work in “good faith” and “mutual respect” in order to avoid what he called “whatever terrible consequences could follow failure” of the talks.

As for Syria, Kerry rejected the latest Syrian government call for negotiations with the opposition, saying the bombing of civilian areas in recent days in the commercial city Aleppo makes it hard to take the offer seriously.

“It is pretty hard to understand how, when you see these Scuds falling on the innocent people of Aleppo, it is impossible to take their notion that they are ready to have a dialogue very seriously,” he said.

In recent weeks, both Syria’s government and the opposition have suggested they are ready for talks to end the war, in stark contrast to previous statements.

Speaking alongside Kerry, Britain's Hague called for increased support for Syria's opposition, saying that "our policy cannot be static" in the face of the violence. Hague said that in the coming weeks Britain would be pushing for a new package of assistance to support the opposition Syrian National Coalition.

The comments come as the coalition is considering boycotting the next Friends of Syria meeting in Rome on Thursday because it says the international community is not doing enough to end the violence. The Syrians are concerned the meeting will produce more talk, but no more action to help them in their fight against the Assad regime.

Kerry urged them to attend nonetheless.

“We are not coming to Rome simply to talk," he said. "We are coming to Rome to make a decision about next steps, and perhaps even other options that may or may not be discussed further after that. We understand that the Syrian people want to see results from this conference.”

In Moscow, Syria's Foreign Minister Walid al-Moallem said that the Syrian government is open to dialogue with those who want to take part.

"We are ready for dialogue with everyone who wants it...even with those who have weapons in their hands," Russia’s Itar-Tass news agency quoted him as saying. "We believe that reforms will not come through bloodshed but only through dialogue.”

Moallem reportedly made the comment before meeting with Russia's Foreign Minister Sergei Lavrov.

The head of the Syrian National Coalition, Moaz al-Khatib, told reporters in Cairo, however, that he wants to hear clearly from the government. He said the opposition grouping has not yet communicated with the Syrian government and is waiting to do so to see what will happen. Al-Khatib also said opposition visits to the United States and Russia are being delayed.

Jessica Golloher contributed to this report from Moscow and Naomi Martig from Washington.
end quote from:

Speaking alongside Kerry, Britain's Hague called for increased support for Syria's opposition, saying that "our policy cannot be static" in the face of the violence.
Kerry Hints at Policy Shift on Syria; Supports 'Change on Ground'
Kerry calls for talks with Syria opposition
John Kerry 'listening tour' focuses on Syria
Posted by intuitivefred888 at 10:27 AM