Supporting-actor race as well as lead-actress category could both be up for grabs. Argo pic. Oscar best-picture favorite "Argo," starring Bryan Cranston and Ben Affleck, has one more ceremony to make a Hollywood ending out of this awards season.
'Lincoln', 'Argo' in tight race as Oscars roll out red carpet
Seth MacFarlane at the Oscars: 8 Tips for the First-Time Host
The Oscars just don't matter - by Dean Obeidallah (in 1,080 Google+ circles)
What time are the Oscars, who will win and who will be there?
2013 Oscars Red Carpet Fashion Live Blog

Supporting-actor race as well as lead-actress category could both be up for grabs. 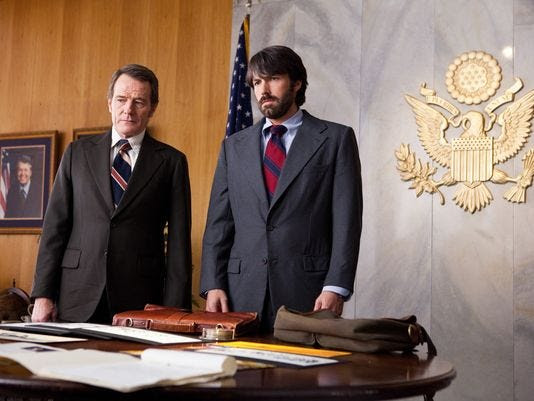 Does Argo have one more Hollywood ending in store, or will Lincoln finally prove presidential in this year's Oscar race?
There is intrigue aplenty heading into tonight's Academy Awards ceremony (ABC, 8:30 p.m. ET/5:30 p.m. PT) as another crop of contenders hopes to hoist gold by the end of the night.
Argo director Ben Affleck was noticeably left out of the director field — a snub that's become more and more perplexing after winning almost every other filmmaking honor this awards season — but his political thriller looks poised to take best picture.
Meanwhile, Steven Spielberg's Lincoln — which leads with 12 nominations — went from frontrunner to also-ran but possibly has an upset in it. Silver Linings Playbook, Life of Pi and Les Miserables also loom as dark horses.
Two locks going into the Oscars seem to be Lincoln star Daniel Day-Lewis, who if victorious will have a record three best actor trophies to his name, and Anne Hathaway, the Les Mis supporting actress contender seemingly cemented as the woman to beat after her memorably stirring rendition of I Dreamed a Dream.
Best actress could come down to voters backing a comedic performance (Jennifer Lawrence in Silver Linings Playbook) vs. a truly dramatic one (Jessica Chastain in Zero Dark Thirty). Or they might feel sentimental and give it to acclaimed Amour star Emmanuelle Riva on her 86th birthday.
The supporting actor field is arguably the most wide open, with all five nominees already minted Oscar winners. Lincoln's Tommy Lee Jones won at the SAG Awards, Christoph Waltz picked up a Golden Globe for his Django Unchained bounty hunter but Robert De Niro's emotional Silver Linings Playbook role may give him his third Academy Award after a 21-year nomination drought.
With Affleck not in the running, Spielberg is favored in the director category for wrangling the various 19th-century personalities and abolitionist themes of Lincoln, yet Academy voters may be too blown away by the visuals of Life of Pi to not give it to Ang Lee.
In the other races, best-picture nominee Amour could be tops for foreign-language film, Adele's Skyfall (from the James Bond film of the same name) appears strong for original song and Wreck-It Ralph is up for best animated feature alongside fellow Disney releases Brave and Frankenweenie, which could garner director Tim Burton his first-ever Oscar.
Before the Academy and host Seth MacFarlane start handing out golden guys, check out the USA TODAY Oscars Viewing Party today at 6 p.m. ET/3 p.m. PT and join co-hosts Arienne Thompson and Cindy Clark as they analyze fashion hits and misses, chat with special newsroom guests and scour the red carpet for stars.
end quote from: