New York Times (blog) ‎- by Dave Itzkoff ‎- 1 hour ago
Lindsay Lohan will play herself in a coming episode of “Anger Management,” in which she becomes romantically connected to the 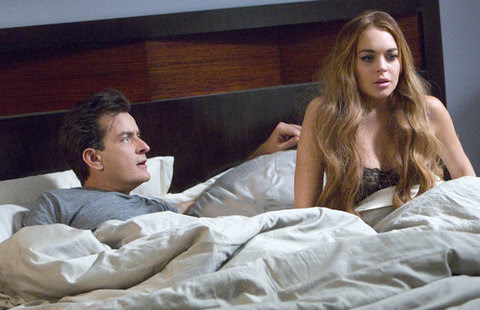 Dimension Films Charlie Sheen and Lindsay Lohan in a scene from “Scary Movie 5.”
In the surest sign that peace, calm and normalcy had been restored to Hollywood after a raucous Academy Awards ceremony, it was announced on Monday morning that Lindsay Lohan would appear in a coming episode of “Anger Management,” the FX sitcom starring Charlie Sheen.
Lionsgate, the studio that produces “Anger Management,” said in a news release that Ms. Lohan would play herself in an episode scheduled to be shown in April, in which she “develops a romantic relationship with Sheen’s character after becoming his therapy patient.”
Ms. Lohan, whose career has seen some bumps of late — the chilly reception to her Lifetime movie, “Liz & Dick”; an instantly notorious account of her various shenanigans on the set of “The Canyons” — seems to have found a kindred spirit in Mr. Sheen.
Mr. Sheen, whose own misdeeds could not possibly be chronicled in this short space, has recently worked with Ms. Lohan in the comedy “Scary Movie 5.” He also said that he had given Ms. Lohan $100,000 out of his own payment for the film, so that their salaries would be more equal. TMZ reported that Ms. Lohan later sent Mr. Sheen a bouquet  in thanks for his generosity.