The vote to confirm Chuck Hagel as Defense secretary is scheduled for Tuesday afternoon. 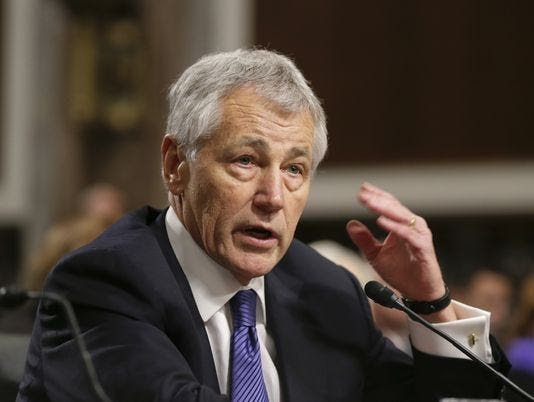 WASHINGTON -- Senators voted to end debate Tuesday on President Obama's nomination of Chuck Hagel to be the secretary of Defense. He now faces a formal vote on confirmation.
The vote was 71-27 to end debate and send the nomination to the Senate for a full vote, which is scheduled for 4:30 p.m. ET Tuesday.
Hagel's confirmation seems virtually assured, as Democrats control the Senate and none has said publicly they oppose him.
Hagel, if approved, will succeed Leon Panetta and immediately inherit a budget crisis. Last week, the Pentagon announced that it plans to furlough the majority of its 800,000 civilian employees to help meet a $46 billion shortfall caused by automatic spending cuts that begin March 1 and its stop-gap budget that prevents shifting funds to urgent needs.
The contentious nomination process will not prevent Hagel from dealing with Congress, George Little, the Pentagon press secretary, said after the vote. Hagel is a "team player" whose interest in cooperation will extend to Congress, Little said.
Hagel has been briefed on issues facing the Pentagon and will be ready to start work immediately upon confirmation, Little said.
Hagel, a Republican former senator from Nebraska, faced opposition from his own party. On Feb. 14, Republicans blocked a final vote on the nomination. His nomination sat idle last week with the Senate in recess. Of his major critics, Sen. John McCain, R-Ariz., signaled that he would no longer oppose a vote on Hagel's nomination, setting the stage for Tuesday's vote.
McCain voted to end debate.
Critics, such as McCain and Sen. Lindsey Graham of South Carolina, have continued to say Hagel is unfit to lead the military. As a senator, Hagel approved military action in Iraq but later criticized the Bush administration's handling of the war. His criticism of the surge of troops in 2007 that helped bring down violence there angered McCain, who blasted Hagel for it at his confirmation hearing.
The ranking member of the Senate Armed Services Committee, Sen. James Inhofe, R-Okla., opposes Hagel, and questioned his toughness on Iran and its nuclear ambitions. Graham has said comments Hagel has made show a lack of commitment to Israel. Sen. Ted Cruz, R-Texas, has raised questions about the propriety of Hagel's income, suggesting at one point that he might have received funds from North Korea.
Hagel has maintained, in answers to the Senate, that he has received no money from such nations.
Sen. Carl Levin, the Michigan Democrat who leads the Armed Services Committee, has said Hagel supplied the committee with the information it needed to approve his nomination.
Hagel, 66, was born in North Platte, Neb. In 1968, Hagel and his brother Tom were both wounded in combat in Vietnam. Chuck Hagel rescued his brother and was awarded two Purple Heart medals.
Hagel served two terms in the Senate from 1997 to 2009.