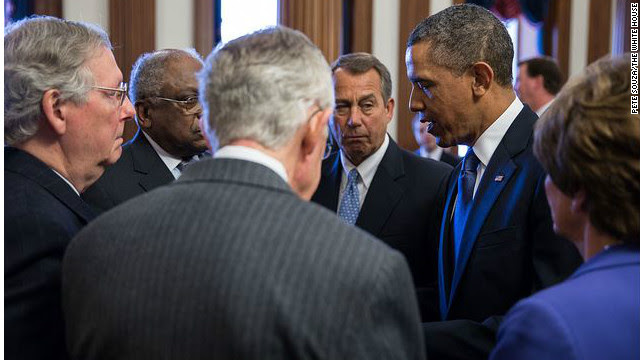 (CNN) – Congressional leaders have been invited to the White House on Friday–the day forced spending cuts are scheduled to start taking effect, two sources said Wednesday.
But while President Barack Obama was on Capitol Hill Wednesday for a Rosa Parks statue unveiling, he met with congressional leaders for a brief, minute-long meeting.


According to an Obama administration official, the president discussed the forced spending cuts and said that during their pending White House meeting on Friday they need to be "ready to talk solutions."
Obama met with the following leaders on Capitol Hill: House Speaker John Boehner, Senate Majority Leader Harry Reid, House Minority Leader Nancy Pelosi, Senate Minority Leader Mitch McConnell, and Assistant House Democratic Leader James Clyburn.
Asked by CNN if the discussion led to anything, Reid suggested it was just a quick huddle. When pressed on if he was surprised the White House meeting was scheduled for Friday, the Nevada Democrat gave a big smile and said, "Nothing surprises me anymore."
Pelosi also told CNN in an exclusive interview that the meeting before the ceremony was brief.
"We just came together and talked about looking forward to getting together on Friday," she said.
Pelosi downplayed the timing of the White House meeting saying, "I have no idea, I guess it's just a scheduling thing. "
"I don't have any problem with us meeting on Friday," she added. "I think what we're talking about is beyond sequester."
Another Democratic official who was at the short gathering described the setting as “regular protocol” for these events–top leaders typically greet the president in an area off-stage and walk in shortly before the event begins.
A GOP aide told CNN that Republicans do not anticipate the White House meeting to be anything more than optics–an effort, the aide said, by Obama to show he is at least talking to Congress on the day the cuts are supposed to kick in.
But the aide added it wasn't clear what was on the president's agenda.
By the time Obama meets with the leaders, the cuts–$85 billion worth over the next seven months–could have already started to take place. It all depends on when Obama issues an order to let them begin. He has until 11:59 p.m. ET on Friday to issue the order, according to an official with the Office of Management and Budget.
A senior congressional Republican chided Obama for the timing of the meeting.
"Either someone needs to buy the White House a calendar, or this is just a – belated – farce," the Republican said. "They ought to at least pretend to try."
And McConnell released a statement, saying "The meeting Friday is an opportunity for us to visit with the President about how we can all keep our commitment to reduce Washington spending."
He continued: "With a $16.6 trillion national debt, and a promise to the American people to address it, one thing is perfectly clear: we will cut Washington spending. We can either secure those reductions more intelligently, or we can do it the President’s way with across-the board cuts. But one thing Americans simply will not accept is another tax increase to replace spending reductions we already agreed to.”
Reid, however, took to the Senate floor earlier Wednesday to "make sure everyone understands this is not President Obama's sequester."
"Congress has the power to (a)void these self-inflicted wounds," he added. "But Democrats can’t do it alone. Republicans have to do their part. Compromise is never easy but surely it is better than doing nothing at all."
– CNN's Jake Tapper and Jessica Yellin contributed to this report.
end quote from: