In this instance we aren't talking about physical Dragons with talons and wings and fire coming out of their mouths, we are talking about the spirits within men of another era and the strength of spirit that kept them alive through all they encountered. I am remembering being a soldier during the time of Genghis Khan. Now, Genghis Khan has a bad reputation among many historians for a variety of reasons. But, sort of in the same way democracy really changed things in the world, Genghis Khan really changed things by one simple idea. Before his time the spoils of war ALL belonged to the leader only. But, Genghis Khan's remarkable idea was like democracy for it's time. He advocated the sharing of the spoils of war among all the leaders of the clans and families who fought with him as he took over much of Asia during his times. This changed everything and made many men and families follow him because they got rich right along with him. Though he got less by giving shares to all his main families that fought alongside him, it was always easy to get unlimited recruits to his band which is one of the reasons he was so incredibly successful in taking over so much of Asia in his era.

So, not only were he and his men fierce horse warriors, they also were based upon an entirely new idea for that region which was sharing of the wealth gained in battle. So whether that was herds of animals, or women or whatever it happened to be everything was share and share alike. And because of this he moved across Asia and almost nothing could stop him.

listen); 1162? – August 1227), born Temujin, was the founder and Great Khan (emperor) of the Mongol Empire, which became the largest contiguous empire in history after his demise.
He came to power by uniting many of the nomadic tribes of northeast Asia. After founding the Mongol Empire and being proclaimed "Genghis Khan", he started the Mongol invasions that resulted in the conquest of most of Eurasia. These included raids or invasions of the Kara-Khitan Khanate, Caucasus, Khwarezmid Empire, Western Xia and Jin dynasties. These campaigns were often accompanied by wholesale massacres of the civilian populations – especially in Khwarezmia. By the end of his life, the Mongol Empire occupied a substantial portion of Central Asia and China.
end quote from Wikipedia under the heading "Genghis Khan".
Here is a map also at the above site of Asia and parts of Africa, Europe and the Middle East in 1200 AD. 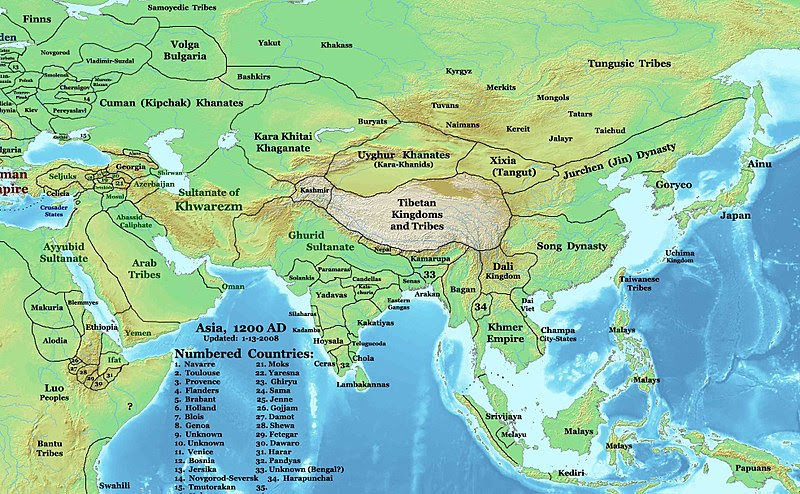 end quote from Wikipedia under the heading "Genghis Khan"

I was having a past life memory of living there then as one of these warriors accompanying Genghis Khan at that time. It was a pretty heady time for us then as life was very simple compared to now. Democracy didn't exist only loyalty to families and clans existed. Survival was not assured and neither was land or other property. One kept what one had only by fighting to keep it so lives were mostly very short. But, if one survived to ages 15 or 20 one might have 10 good years of adulthood before the injuries and illnesses and just the cold weather during the winters started killing people. Though some people still lived into their 70 and 80s then this always was the exception and most of these people were very wise and wealthy and crafty and kept their descendents nearby in case of any kind of emergency that might arise.

Dragon Warriors refers to the intensity with which life had to be lived in order to survive at all. Of course there would be periods of boring and idle time that most people experience punctuated by life threatening events that might occur maybe once or twice a year in one's life. And being able to know when these events might occur often spelled the difference between survival and death in many  instances. So, there was an attitude of "Always preparing for some kind of adventure or potential disaster" that kept one from the almost complete boredom of the average day tending sheep or goats that was the life of most people living nomadic lives then.

I remember the attitude then "which would be completely abhorrent to the average person on earth Today" which went something like this: "I live by fighting to take whatever I can so my clan can live on and my children have enough wealth to survive anything. Anyone who stands in my way I must cut down as well as their children so they don't grow up and hunt me and my family down and kill us in our sleep one day. I will take whatever women are strong and healthy and useful and make them members of my family if possible and all the rest will be killed so they don't raise sons who will come after us one day."

Though today this would be disgusting to pretty much everyone on earth I still remember what it was to think this way today. It is based upon a complete pragmatism of "Survival of the fittest". In other words, if people weren't strong enough to stand up to us they were likely either going to die, become our slaves or they were going to be women in our families. It is strange to remember times like these today about 1000 years later and what it actually took to survive for those people back then.

And strangely enough, it increases my compassion for people then and now and just how hard in different ways life was then and life is now as well for people here on earth. Everything I find is a trade off. In some ways life is better now but in other ways though lives were shorter in some ways people were happier even if for shorter amounts of time than now. So, feeling compassion for all people then and now comes from remembering this past life and all past lives in the past, present and future on Earth and beyond.

It is sort of like being raised in Any religion on earth. When you are little you are sort of like little sponges and you absorb whatever people teach you. Then you are a teenager and you might think your parents are sort of crazy for believing whatever they do. Then you are in your twenties and you have to find some way to survive your 20s too. So, often people gravitate to their parents religions even if they thought these religions were crazy just as a way to survive their 20s. They might still think those religions are crazy but don't know any other way to survive because they are so busy working and finding a way to stay alive. Knowing this I feel compassion for all the beings sharing this experience in the past, present and future of Earth and all planets like Earth past, present and future.
Posted by intuitivefred888 at 11:53 AM