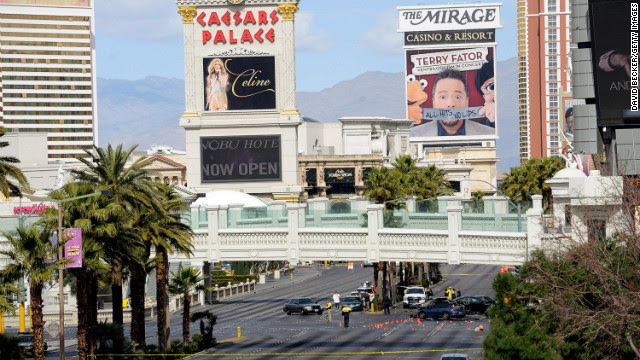 STORY HIGHLIGHTS
Las Vegas (CNN) -- A shooting and a fiery crash left three people dead in the neon heart of the Las Vegas Strip on Thursday, and police scrambled to find out who triggered the carnage.

The bloodshed closed the Strip for about a block and a half around some of its biggest draws, leaving tourists gaping at a wrecked Maserati, a burned-out taxi and four other vehicles.
"First time in Vegas, and then, like, the whole thing, what you know from movies only -- I was shocked," Christine Gerstenberger, who was visiting the desert gambling mecca from Germany, said Thursday afternoon. She and her brothers debated going back to the hotel "because I'm totally scared," but "We're too curious," she said.
See iReporter's video of fire
One of those killed was Kenneth Cherry Jr. -- a rapper also known as Kenny Clutch -- his attorney Vicki Greco said. According to his Facebook page, Cherry is from Oakland, California, and lived in Las Vegas.

Shooting on the Las Vegas strip
Four of the Nevada city's biggest casinos -- Caesars Palace, the Bellagio, Bally's and the Flamingo -- are nearby, and police collected surveillance-camera video from them to help the probe.
It started around 4:20 a.m. with a dispute in the valet lot of the Aria Hotel, about a block away, Sheriff Douglas Gillespie said. Investigators haven't confirmed the cause of the altercation, but he said it spilled onto the street as someone in a black Range Rover Sport fired several shots at the Maserati as it headed north on Las Vegas Boulevard.
When the driver was hit, the Maserati continued into the intersection of the boulevard and Flamingo Road and collided with a taxi, which caught fire. The sports car's driver, the cab driver and a passenger in the taxi all died; a passenger in the Maserati and three other people in the resulting pileup were hurt, Gillespie said.
The Maserati's passenger and other witnesses are helping detectives piece together what happened, he said. And the "top priority" for police is to find the Range Rover, which sped away from the intersection, and those inside it when the shooting happened.
"This act is totally unacceptable, and we are going to make a very clear message to these individuals in regards to that," Gillespie said.
Police in neighboring states have been asked to look for the sport-utility vehicle, and Gillespie warned the occupants should be considered armed and dangerous.
"Clearly, the suspects have no regard for the lives and safety of others," he said.
The Range Rover had an out-of-state dealer plate, tinted windows and large, black rims, Las Vegas Police Sgt. John Sheahan said.
The block around the crash remained closed off into Thursday afternoon. John Lamb, who was inside Caesars Palace, told CNN affiliate KLAS he heard the commotion and saw the taxi on fire from a window.
"There was a loud bang, and I hear two other booms. I looked out my window at Caesars Palace ... and could see the fireball," he told KLAS.
Man kills 3, himself in Southern California shooting

Email ThisBlogThis!Share to TwitterShare to FacebookShare to Pinterest
Labels: Gunfire and fiery crash kills 3 in Vegas