Syrian Opposition pulls out of talks 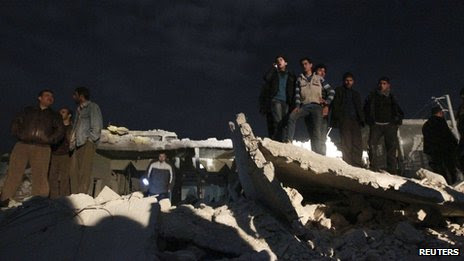 The opposition Syrian National Coalition (SNC) has pulled out of a series of international meetings in protest at what it said was the "shameful" failure to stop violence.
The SNC said it had decided not to attend a meeting of the Friends of Syria Grouping in Rome next month.
It was also turning down invitations for talks in Washington and Moscow.
A statement singled out Russia for supporting and supplying weapons to President Bashar al-Assad.
"The international silence on the crimes committed every day against our people amounts to participating in two years of killings," the SNC said.
"The Russian leadership especially bears moral and political responsibility for supplying the regime with weapons," it added.
No compromise
Continue reading the main story

The decision to boycott international diplomatic meetings in Syria effectively torpedoes the initiative launched by SNC lea
der Moaz al-Khatib, the BBC's Jim Muir says.
Three weeks ago he announced that he was ready to meet Syrian government representatives to discuss an end to the violence.
The initiative was strongly backed by international powers including Russia and he was invited to Washington and Moscow. Now those visits will not take place.
The SNC will also boycott the Rome meeting of the mainly western Friends of Syria group, which supports the opposition.
It is particularly enraged by the use of Russian-supplied Scud missiles to bombard rebel-held areas of Aleppo - Syria's biggest city.
"Hundreds of civilians have been killed by Scud missile strikes and Aleppo is being systematically destroyed," the SNC statement said.
The decision to pull out of talks has dismayed diplomats, BBC correspondent Jim Muir says.
But opposition leaders are clearly worried that the SNC risks being discredited and losing touch with realities on the ground if it gets drawn into a diplomatic process involving compromise with a regime that shows no sign of readiness to step down, he adds.

Syria conflict: opposition SNC pulls out of talks
Posted by intuitivefred888 at 8:56 AM

Email ThisBlogThis!Share to TwitterShare to FacebookShare to Pinterest
Labels: Syrian Opposition pulls out of talks