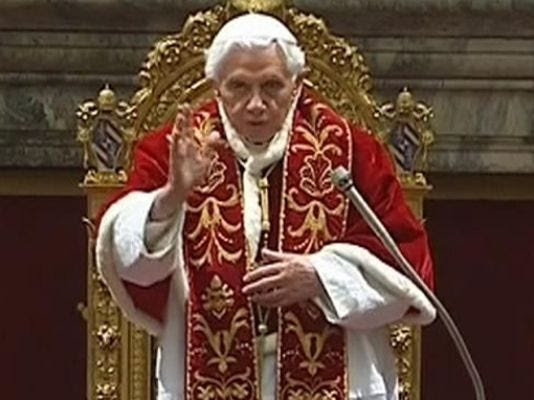 VATICAN CITY — Pope Benedict XVI left the Vatican for the last time shortly before 5 p.m. local time Thursday, but not before promising "unconditional reverence and obedience" to his successor in his final greetings to cardinals before retiring.
At 5:07 p.m. local time, Benedict left the Vatican by Italian government helicopter for Castel Gandolfo, the traditional papal summer residence 15 miles south of Rome. It landed there 17 minutes later. After a short ride, he slowly made his way into the villa at 5:32 p.m.
His final tweet as pope:
"Thank you for your love and support. May you always experience the joy that comes from putting Christ at the (center) of your lives."
At 8 p.m. local time, he will be transformed from pope into pontiff emeritus, his views on faith and morals will no longer be seen as infallible, and the pope's role as the leader of the world's 1.1 billion Catholics will officially be a "sede vacante" -- empty seat.
Attention among Vatican observers is now shifting to the debate over the weary pontiff's legacy and the process that will select his replacement.
Benedict urged his cardinals Thursday to work in unity so that the College of Cardinals is "like an orchestra" where "agreement and harmony" can be reached — a clear message to the conclave that will pick the next pope. He said he would pray for the cardinals in coming days and weeks as they choose his successor.
In his last general audience Wednesday, Benedict thanked more than 100,000 people gathered in St. Peter's Square for their support and he asked for their prayers before issuing a warning for his successor about the lack of privacy that would come along with the position.
His successor, Benedict said, "will no longer have any privacy. He will belong forever and totally to everyone and to all the church."
All indications are that Benedict will relish his privacy at Castel Gandolfo for the next few months, and, after that, at a private residence being constructed for him on the Vatican grounds, where Vatican spokesman Federico Lombardi said Benedict will dedicate himself to prayer, reflection, study and writing.
To those in St. Peter's Square early on Benedict's final day as pontiff, the transition is a difficult one for the faithful.
"It's a difficult time for the church, and a difficult time for Benedict and he has said he feels too weak to do what must be done," said Rosemarie Acot, a Philippine nun who said she prays in St. Peter's Basilica most mornings.
I'm sad but we shouldn't be sad. It's a courageous choice to resign,'' said Chiara Bivet, a 26-year-old speech therapist from Pisa. "The church will emerge stronger from this."
One question being debated among Vatican observers is the extent to which recent scandals -- ranging from reports of gay clergy working in the Vatican and reports of sexual misconduct and cover-ups to charges of a lack of transparency -- will impact the way Benedict's eight-year papacy is viewed.
"I have never met anyone who didn't see Benedict as a holy man and an effective spiritual leader," said Alistair Sear, a Rome-based church historian. "The question is whether these lapses in other areas, whether these likely failures as an administrator will be what he is ultimately remembered for."
There is also a great deal of speculation over the process of the conclave, the process that will select the next pope. The Vatican is expected to announce the dates of the conclave soon after Benedict's departure -- perhaps as soon as Friday. And, already, the conventional wisdom is that the date the Vatican selects will have an impact on who is selected as the next pope.
"If the conclave is called quickly, it will favor the most visible cardinals, the ones already well known among cardinal-electors," said author and Vatican watcher John Thavis, referring to the 115 cardinals under the age of 80 who have said they will attend the conclave.
That was the case in 2005, when a conclave held just 16 days after the death of John Paul II ended up selecting the College of Cardinal's dean, German Cardinal Joseph Ratzinger, who became Benedict XVI.
Benedict becomes the first pontiff in 600 years to resign. The doors of the palazzo will shut and the Swiss Guards will go off duty. 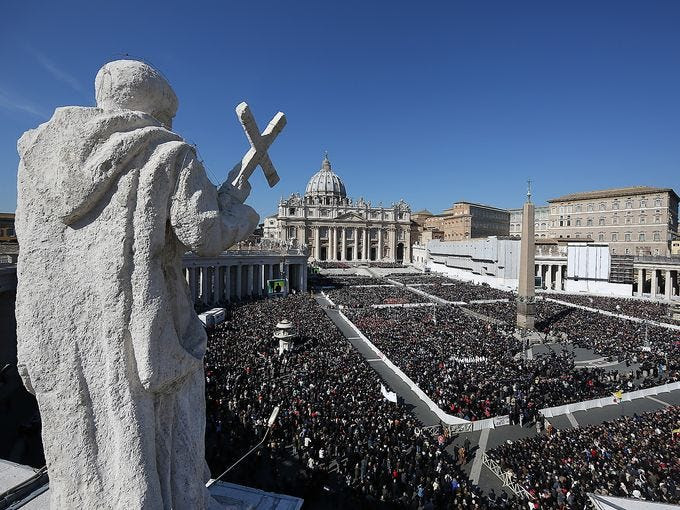 Thousands gather in St. Peter's Square as Pope Benedict XVI arrives for his last weekly audience on Feb. 27 at the Vatican. The pope recalled moments of "joy and light" during his papacy but also times of great difficulty in an emotional, final general audience in St. Peter's Square before retiring.  Peter Macdiarmid, Getty Images
Fullscreen
Next Slide
end quote from: