The blast may have been caused by a motorist or a workman striking a gas main. Kansas City Blast. Firefighters battle a massive fire Tuesday at the Country Club Plaza in Kansas City, Mo.
Body found in rubble of exploded KC restaurant
Kansas City Shopping Complex Explosion, 14 Injured
At least 19 injured in Kansas City gas explosion 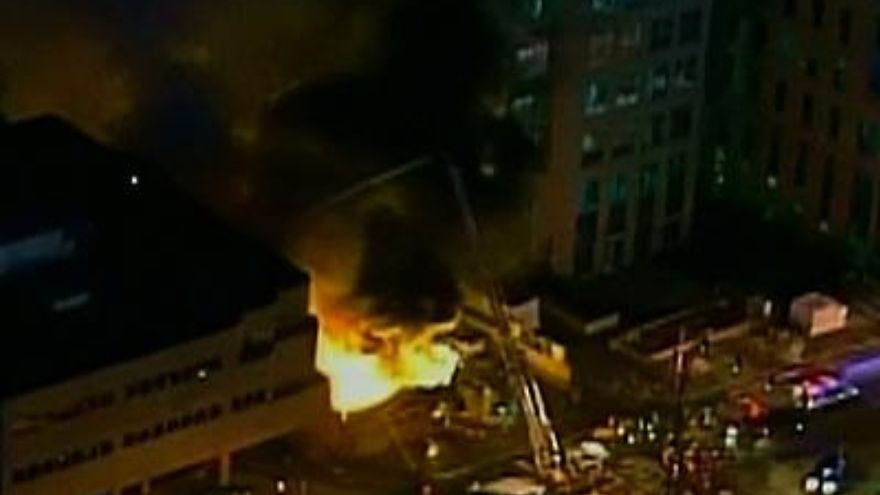 The blast may have been caused by a motorist or a workman striking a gas main. 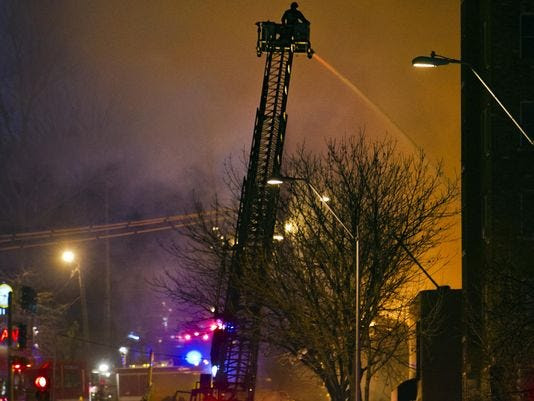 Search crews on Wednesday found a body in the blackened rubble of a Kansas City, Mo., restaurant that was leveled by a gas line explosion that injured 15 people, Kansas City Mayor Sly James told reporters.
A female employee was missing after an earthquake-like blast Tuesday evening at J.J.'s restaurant triggered a massive fire at the Country Club Plaza shopping center.
James did not say whether the victim was a man or a woman. One other employee thought missing was found at St. Luke's Hospital receiving treatment.
Crews looking for possible victims were rushing to clear out heavy debris Wednesday before a major winter storm hits the region.
James said Wednesday morning that authorities can't be sure that every person who may have been at the restaurant had been accounted for.
He said 15 people were injured in the blast and fire. Six are still hospitalized, and nine have been released.
Heavy equipment began arriving before dawn as workers rushed to remove the debris and investigate the cause of the blast because of the expected arrival of the storm, James said. Cadaver dogs were also being used to scour the blackened debris.
"We have a major storm coming in this evening," James said. "We're going to work diligently to get in (to the blast site) to get underneath that weather." 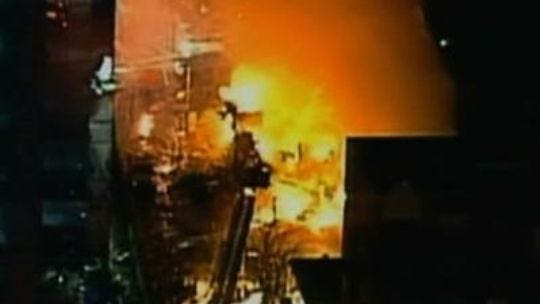 Kansas City Fire Chief Paul Berardi said earlier that the search for victims could take hours.
"I would always fear there are fatalities in a scene like this," Berardi said. "When we got to the scene, we had a fully involved restaurant that had patrons, probably several patrons, inside at the time of incident."
Authorities were still investigating the cause of the blast, which appeared to have engulfed an entire block in the four-alarm blaze that burned for about 90 minutes.
Police spokeswoman Rhonda Flores said while initially the explosion was attributed to a motor vehicle striking a natural gas line, the blast may have been triggered by a piece of heavy equipment disrupting the gas main.
Berardi said investigators would be brought to the site only after the search for possible victims was completed.
Missouri Gas Energy, the utility that supplies the area, said in a statement that "early indications are that a contractor doing underground work struck a natural gas line."
Berardi, however, cautioned that the cause was not yet known. "This investigation needs to be concluded before we want to speculate on any of that," he said. 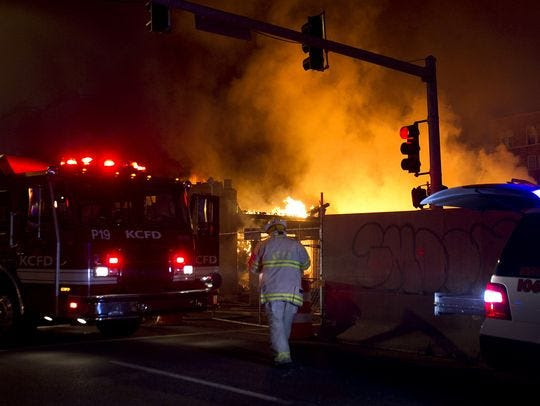 Firefighters are on the scene of a gas explosion Tuesday at the Country Club Plaza in Kansas City, Mo.(Photo: Tammy Ljungblad AP)
"Some witnesses have said it might have been a construction worker on a backhoe doing construction in the area," Flores said. "We're still waiting for final word on that."
Berardi said officials don't suspect foul play at this time.
Residents told KCTV they had smelled gas about an hour before the explosion around 6 p.m. and alerted the local utility.
KMBC-TV, citing a man who said he visited the restaurant regularly, reported that firefighters and Missouri Gas Energy representatives had been checking for the source of a gas odor before the explosion. Customers were asked to leave, but several employees stayed behind. 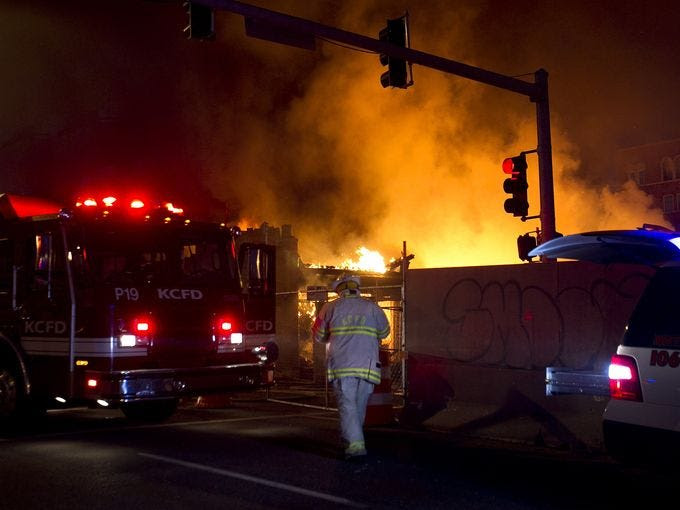 One of the things all of us can do to protect ourselves some from these kinds of problems happening to us is to look outside of our homes (if we have natural gas) coming into our homes and check to see if the connections to the meters are getting rusty. If they are call your local natural gas company and have them either sand down the connections and repaint them gray or whatever color they are in your state or have them replace the connections completely if the rust has gotten too deep there to be able to sand them down and replace them. This is something all of us can do to prevent natural gas leaks or explosions.

A couple of years ago there was a bad fire near one of our homes in Southern California on the Coast. A friend of mine I hired to house sit the house when it isn't being rented out as a vacation rental who is a retired Navy Fire Captain went with me to see if the fire was coming near to our house then. However, because neither of us lived in that area we did not understand local Fire Rules regarding what one does to tell people they have evacuated. We found out a day or so later that what people are supposed to do in a fire to show the fire department that they have evacuated is to open their window shades and turn the lights on to show they have evacuated. So, when the Fire Captain and I drove into areas on fire there were still homes with lights on with shades open so we thought it hadn't been evacuated yet (but we were wrong). As a result of a very fast moving fire through houses and neighborhoods we got caught in my car by the fire and were trying to escape when we saw gas mains out side of people's houses shooting flames 10 to 15 feet into the air. I screeched the tires and got out of there and luckily we found a fire station that was evacuating because it was going to be burnt down and they told us the last way out of there so we wouldn't be burnt up too. My wife's Lexus that was new then smelled like smoke for several months after that inside and she was pretty angry.

But I will never forget what gas mains right outside of people's homes shooting flames 10 to 15 feet in the air actually look like!