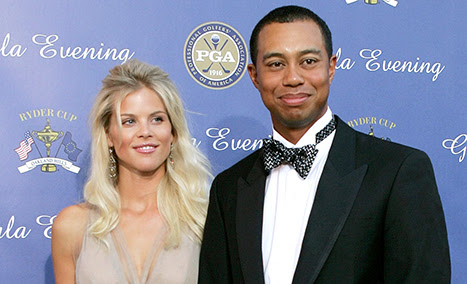 Time heals all wounds. Tiger Woods and ex-wife Elin Nordegren were photographed together for the first time in years on Saturday, Feb. 23 -- reuniting in Jupiter, FL with their daughter Sam, 5, and Charlie, 4. As first revealed by TMZ, the golfer, 37, and former model, 33, were snapped strolling alongside one another at an event for a local youth sport organization.
PHOTOS: Tiger and Elin's kids
According to TMZ, Woods arrived first with the kids, with Nordegren joining the trio about an hour later. Although their six year marriage ended bitterly and quite publicly in 2010 -- following the late 2009 revelations of Woods' many, many affairs with other women -- TMZ reports that the couple happily chatted with one another for about half an hour and "appeared to enjoy each other's company."
PHOTOS: Revisiting the Tiger Woods sex scandal
The celebrated golfer, for his part, has moved on, romantically speaking. Woods has been quietly dating Olympic skier Lindsey Vonn for several months, even dispatching his private jet to retrieve Vonn, 28, from Austria following a serious injury. "Their friendship slowly turned into a relationship," an insider told Us Weekly.
AUDIO: Hear Tiger Woods panic to his mistress about Elin
Nordegren, meanwhile, was recently linked to Swedish hockey player Douglas Murray, and has been focusing on the completion of her stunning $12 million beachfront mansion in North Palm Beach, Fla.
This article originally appeared on Usmagazine.com: Tiger Woods, Elin Nordegren Reunite at Event, Photographed for First Time in Years: Pictures