After most NASA science spacecraft launches, researchers wait patiently for months as instruments on board are turned on one at a time, slowly ramped up to full power, and tested to make sure they work at full capacity.
Van Allen Belts: How Little We Knew Ye
Radiation ring around Earth mysteriously appears, then dissipates
NASA Discovers New Radiation Belt Around Earth

After most NASA science spacecraft launches, researchers wait patiently for months as instruments on board are turned on one at a time, slowly ramped up to full power, and tested to make sure they work at full capacity. It's a rite of passage for any new satellite in space, and such a schedule was in place for the Van Allen Probes when they launched on Aug. 30, 2012, to study two giant belts of radiation that surround Earth.

But a group of scientists on the mission made a case for changing the plan. They asked that the Relativistic Electron Proton Telescope (REPT) be turned on early – just three days after launch -- in order that its observations would overlap with another mission called SAMPEX (Solar, Anomalous, and Magnetospheric Particle Explorer), that was soon going to de-orbit and re-enter Earth's atmosphere.

It was a lucky decision. Shortly before REPT turned on, solar activity on the sun had sent energy toward Earth that caused the radiation belts to swell. The REPT instrument worked well from the moment it was turned on Sep. 1. It made observations of these new particles trapped in the belts, recording their high energies, and the belts' increased size.

Then something happened no one had ever seen before: the particles settled into a new configuration, showing an extra, third belt extending out into space. Within mere days of launch, the Van Allen Probes showed scientists something that would require rewriting textbooks.

"By the fifth day REPT was on, we could plot out our observations and watch the formation of a third radiation belt," says Shri Kanekal, the deputy mission scientist for the Van Allen Probes at NASA's Goddard Space Flight Center in Greenbelt, Md. and a coauthor of a paper on these results. "We started wondering if there was something wrong with our instruments. We checked everything, but there was nothing wrong with them. The third belt persisted beautifully, day after day, week after week, for four weeks."

The scientists published their results in a paper in the journal Science on Feb. 28, 2013. Incorporating this new configuration into their models of the radiation belts offers scientists new clues to what causes the changing shapes of the belts – a region that can sometimes swell dramatically in response to incoming energy from the sun, impacting satellites and spacecraft or pose potential threats to manned space flight. 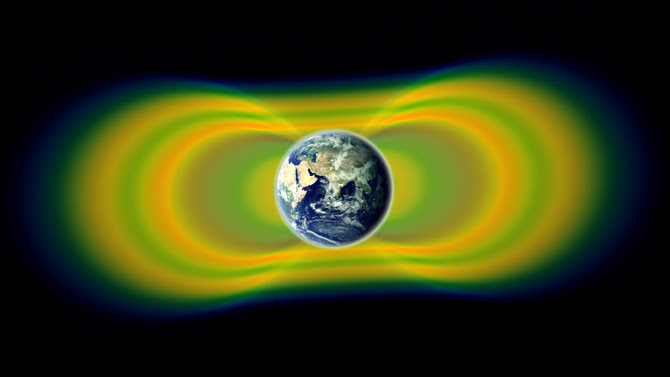 › View larger
Two giant swaths of radiation, known as the Van Allen Belts, surrounding Earth were discovered in 1958. In 2012, observations from the Van Allen Probes showed that a third belt can sometimes appear. The radiation is shown here in yellow, with green representing the spaces between the belts. Credit: NASA/Van Allen Probes/Goddard Space Flight Center

The radiation belts, or Van Allen belts, were discovered with the very first launches of satellites in 1958 by James Van Allen. Subsequent missions have observed parts of the belts – including SAMPEX, which observed the belts from below – but what causes such dynamic variation in the belts has remained something of a mystery. Indeed, seemingly similar storms from the sun have at times caused completely different effects in the belts, or have sometimes led to no change at all.

The Van Allen Probes consist of two identical spacecraft with a mission to map out this region with exquisite detail, cataloguing a wide range of energies and particles, and tracking the zoo of magnetic waves that pulse through the area, sometimes kicking particles up to such frenzied speeds that they escape the belts altogether.

"We've had a long run of data from missions like SAMPEX," says Daniel Baker, who is the principal investigator for REPT at the University of Colorado in Boulder and first author on the Science paper. "But we've never been in the very throat of the accelerator operating a few hundred miles above our head, speeding these particles up to incredible velocities."

In its first six months in orbit, the instruments on the Van Allen Probes have worked exceptionally well and scientists are excited about a flood of observations coming in with unprecedented clarity. This is the first time scientists have been able to gather such a complete set of data about the belts, with the added bonus of watching from two separate spacecraft that can better show how events sweep across the area.

Spotting something new in space such as the third radiation belt has more implications than the simple knowledge that a third belt is possible. In a region of space that remains so mysterious, any observations that link certain causes to certain effects adds another piece of information to the puzzle.

Baker likes to compare the radiation belts to the particle storage rings in a particle physics accelerator. In accelerators, magnetic fields are used to hold the particles orbiting in a circle, while energy waves are used to buffet the particles up to ever faster speeds. In such accelerators, everything must be carefully tuned to the size and shape of that ring, and the characteristics of those particles. The Van Allen Belts depend on similar fine-tuning. Given that scientists see the rings only in certain places and at certain times, they can narrow down just which particles and waves must be causing that geometry. Every new set of observations helps narrow the field even further.

"We can offer these new observations to the theorists who model what's going on in the belts," says Kanekal. "Nature presents us with this event – it's there, it's a fact, you can't argue with it -- and now we have to explain why it's the case. Why did the third belt persist for four weeks? Why does it change? All of this information teaches us more about space." 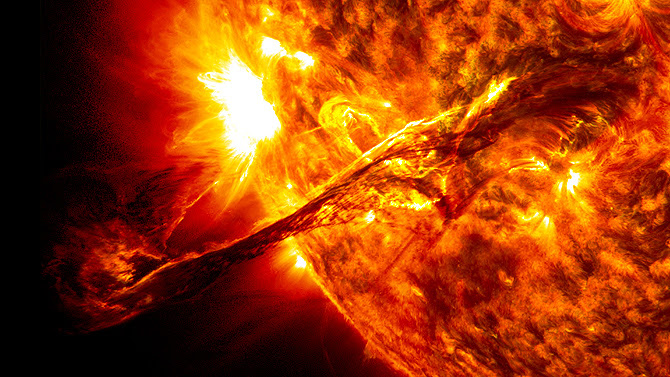 › View larger
On Aug. 31, 2012, a giant prominence on the sun erupted, sending out particles and a shock wave that traveled near Earth. This event may have been one of the causes of a third radiation belt that appeared around Earth a few days later, a phenomenon that was observed for the very first time by the newly-launched Van Allen Probes. This image of the prominence before it erupted was captured by NASA's Solar Dynamics Observatory (SDO). Credit: NASA/SDO/AIA/Goddard Space Flight Center

Scientists already have theories about just what kind of waves sweep out particles in the "slot" region between the first two belts. Now they must devise models to find which waves have the right characteristics to sweep out particles in the new slot region as well. Another tantalizing observation to explore lies in tracking the causes of the slot region back even further: on Aug. 31, 2012, a long filament of solar material that had been hovering in the sun's atmosphere erupted out into space. Baker says that this might have caused the shock wave that led to the formation of the third ring a few days later. In addition, the new belt was virtually annihilated four weeks after it appeared by another powerful interplanetary shock wave from the sun. Being able to watch such an event in action provides even more material for theories about the Van Allen belts.

Despite the 55 years since the radiation belts were first discovered, there is much left to investigate and explain, and within just a few days of launch the Van Allen Probes showed that the belts are still capable of surprises.

"I consider ourselves very fortunate," says Baker. "By turning on our instruments when we did, taking great pride in our engineers and having confidence that the instruments would work immediately and having the cooperation of the sun to drive the system the way it did – it was an extraordinary opportunity. It validates the importance of this mission and how important it is to revisit the Van Allen Belts with new eyes."

The Johns Hopkins University Applied Physics Laboratory (APL) built and operates the twin Van Allen Probes. The Van Allen Probes comprise the second mission in NASA's Living With a Star (LWS) program to explore aspects of the connected sun-Earth system that directly affect life and society. The program is managed by NASA Goddard.

If the probe was "turned on" September 1st then it saw the really large Solar Flares that hit October 8th and October 11th and 12th which knocked out some satellites and even satellites which allowed some airlines to fly safely. At least one airline or more had to ground planes for 5 hours or more when the flare hit the magnetosphere because it temporarily knocked out the satellites carrying their internet signals between states and countries. Also, GPS satellites often turn upside down when flares hit the magnetosphere and cannot transmit signals to earth until they are righted.