Reporters in Syria See No End in Sight 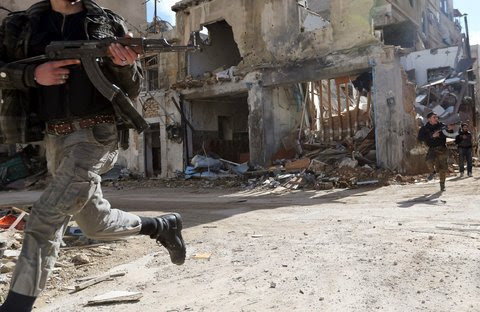 Goran Tomasevic/Reuters Fighters from the Free Syrian Army in the northeastern Damascus suburb of Harasta last month.
It has been two years since Syria’s president, Bashar al-Assad, deployed troops to counter a wave of rebels intent on overthrowing him.
The war, a mix of the sectarian, political and personal, has turned bustling streets, workplaces and homes across the country into rubble-strewn battlegrounds, contested bitterly for the smallest strategic value. On the front lines in two of the country’s largest cities, Damascus, the capital, and Aleppo, reporters have suggested in recent days that there is no end in sight.
Goran Tomasevic of Reuters, a photographer who has produced some of the conflict’s most telling images, spent a month in what were once suburbs of Damascus. He described what he called “bloody stalemate.”


I watched both sides mount assaults, some trying to gain just a house or two, others for bigger prizes, only to be forced back by sharpshooters, mortars or sprays of machinegun fire.
As in the ruins of Beirut, Sarajevo or Stalingrad, it is a sniper’s war; men stalk their fellow man down telescopic sights, hunting a glimpse of flesh, an eyeball peering from a crack, use lures and decoys to draw their prey into giving themselves away.
Fighting is at such close quarters that on one occasion a rebel patrol stumbled into an army unit inside a building; hand grenades deafened us and shrapnel shredded plaster, a sudden clatter of Kalashnikov cartridges and bullets coming across the cramped space gave way in seconds to the groans of the wounded.


Days are punctuated by regular halts for prayer in a conflict, now 23 months old, that has become increasingly one pitting Syria’s Sunni Muslim majority, stiffened by Islamist radicals, against Alawites led by Assad; they have support from Iran, from whose Shi’ite Islam their faith is derived.
Typical of the frontline routine was an attack that a couple of dozen men of the brigade Tahrir al-Sham — roughly “Syrian Freedom” — mounted in Ain Tarma on January 30, aiming to take over or at least damage an army checkpoint further up the lane.
I photographed one two-man fire team crouch against a breeze-block garden wall, about 50 meters from their target.
In blue jeans, sneakers and muffled against a morning chill, their role was to wait for comrades to hit the army position with rocket-propelled grenades then rake the soldiers with their AK-47 automatic rifles as they were flushed out into the open.
There was little to make a sound in the abandoned streets. The attackers whispered to each other under their breath.
Then two shots rang out. One of the two riflemen, heavy set and balding, screamed in pain and collapsed back on the tarmac.
The day’s assault was going wrong before it even started.

Ian Pannell of the BBC reported on a similar deadlock, outside Aleppo. “Too much has been lost to talk of winners and losers,” Mr. Pannell said. “But make no mistake. The rebellion is advancing.” The rebel forces’ next targets, he said, include a base said to house some of Syria’s reported chemical weapon stockpile, and the city’s airport. Victory in either fight, it seems, would most likely serve only to lengthen and complicate the fight.
Middle East, News, world, Middle East and North Africa Unrest (2010- ), muslims and islam, Tomasevic, Goran

Email ThisBlogThis!Share to TwitterShare to FacebookShare to Pinterest
Labels: Reporters in Syria See No End in Sight