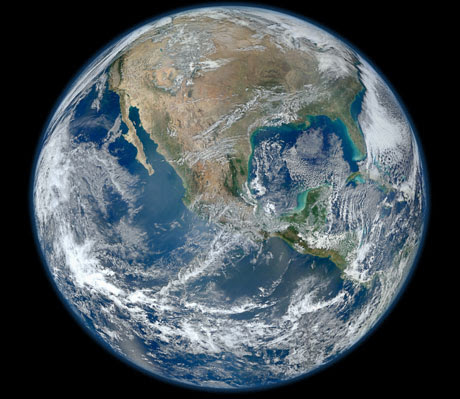 The Americas, seen from space on 4 January 2012. Photograph: Nasa Goddard Photo
If we could see the world with a particularly illuminating set of spectacles, one of its most prominent features at the moment would be a giant carbon bubble, whose bursting someday will make the housing bubble of 2007 look like a lark. As yet – as we shall see – it's unfortunately largely invisible to us.
In compensation, though, we have some truly beautiful images made possible by new technology. Last month, for instance, Nasa updated the most iconic photograph in our civilization's gallery: "Blue Marble", originally taken from Apollo 17 in 1972. The spectacular new high-def image shows a picture of the Americas on 4 January, a good day for snapping photos because there weren't many clouds.
It was also a good day because of the striking way it could demonstrate to us just how much the planet has changed in 40 years. As Jeff Masters, the web's most widely read meteorologist, explains:


"The US and Canada are virtually snow-free and cloud-free, which is extremely rare for a January day. The lack of snow in the mountains of the western US is particularly unusual. I doubt one could find a January day this cloud-free with so little snow on the ground throughout the entire satellite record, going back to the early 1960s."

In fact, it's likely that the week that photo was taken will prove "the driest first week in recorded US history" end quote.

One of the reasons there were so few clouds and snow in the western United States was that the Arctic Air mass that usually stays fairly well stabilized at the North Pole became destabilized because of how much ice melted off this summer and fall. So, the arctic subzero temperatures "FEll?" down from the Arctic into Siberia, Russia, Europe and North Africa. However, next year if the ice keeps melting off the north pole like it has been it could just as easily "Fall off" the North pole next year or the year after down into Canada, the U.S. and points south with snow for several weeks as far south as Florida, Cuba, Southern California and Baja California, for example. So, the weather anomaly may become more commonplace over the years for cold arctic air to "Fall off" further south one way or another in December, January or February because melting ice in the north has destabilized normal wind and weather at the North Pole because of Global Climate Change. Or a totally new anomaly might take place as the north pole melts off further and further each year. So, I guess the best thing to say is either that there is no normal anymore or that there will now be "new" normals.

And the sad thing is that the Western U.S. still looks like the photo above because snowfalls are mostly below normal west of the Rockies and south of about Portland or Eugene, Oregon. So, if you are going skiing look up how much snow is there before you go. You might be very surprised this year. Where I live on the Northern California coast rainfall levels are averaging about 1/2 of normal or average of what we should expect this time of year since October. Since our rainy season is only September to May or June usually we now only have March or April to make up for the loss of rain so far this season.

The following word button  will prove will take to you the following quote which I found very interesting:"


Remarkably Dry and Warm Winter Due to “Most Extreme Configuration of the Jet Stream Ever Recorded” end quote from "will prove" website above.

Also, this "most extreme configuration of the Jet Stream ever recorded also created: 2012 European cold wave which killed between 500 and 1000 people all over Russia, Eastern Europe and caused untold havoc as far south as North Africa.

When I saw movies of an icebreaker breaking ice on the Seine River in Paris so people would stop running across the river and falling in through the ice and also saw a guy snowboarding down a hill in the middle of Rome I knew this was a very strange event indeed which we both now know was caused directly by the "most extreme configuration of the Jet Stream ever recorded".

Email ThisBlogThis!Share to TwitterShare to FacebookShare to Pinterest
Labels: 2012: Driest first week in U.S. in History?