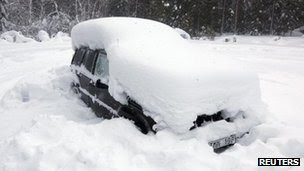 The cold, nutrition-deprived man may have gone into a kind of hibernation, said one doctor
A Swedish man has survived being trapped in his snow-covered car for two months without food, police say.
The car was found on Friday at the end of a forest track more than 1 km (0.6 miles) from a main road in northern Sweden.
Police say the temperature in the area had recently dropped to -30C (-22F).
The man, who was too weak to utter more than a few words, said he had been inside since 19 December. He may have survived by drinking melted snow.
Police say they have no reason to doubt his story.
Sleeping bag The man, who has not been named, is recovering at Umea University Hospital - where staff say he is doing well considering the circumstances.
The 45-year-old was discovered by snowmobilers who initially assumed the car was a wreck until they dug their way to a window and saw movement inside, reported the Vasterbotten Courier newspaper.
The man was huddled in a sleeping bag on the back seat, said policeman Ebbe Nyberg.
"He was in a very poor state. Poor condition. He said he'd been there for a long time and had survived on a little snow.
"He said himself he hadn't eaten anything since December," Mr Nyberg said.
Doctors at the Umea University Hospital said they would normally expect a person to survive without food for around four weeks, said the Vasterbotten Courier.
One doctor told the newspaper that the man might have survived so long by going into a kind of hibernation. end quote from:
http://www.bbc.co.uk/news/world-europe-17088173

Though for many people this might seem impossible for anyone to survive only on water for 2 months, I used to have a good friend who for health and "Spiritual" reasons used to once a year fast on water only for 40 days and 40 nights because he had heard Jesus did this. I saw him do this on at least 3 occasions on 3 different years so I know at least 40 days is possible to survive even in the winter on just water. So, maybe the doctors are right that this gentleman by sort of hibernating survived 2 months on just water. It sort of makes one wonder what are human bodies actually capable of?
Posted by intuitivefred888 at 12:50 AM

Email ThisBlogThis!Share to TwitterShare to FacebookShare to Pinterest
Labels: man trapped for two months in snow in car with only water and survives