Did We Forget About Mutually Assured Destruction?

How did we forget about mutually assured destruction? 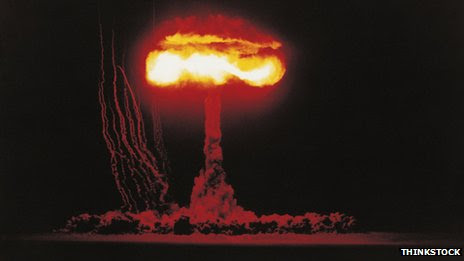 Fifty years ago this week the idea of mutually assured nuclear destruction was outlined in a major speech. But how did this frightening concept of the Cold War fade from people's psyches?
Today the notion of all-out nuclear war is rarely discussed. There are concerns about Iran and North Korea's nuclear programmes and fears that terrorists might get hold of a nuclear bomb.
But the fear of a war in which the aim is to wipe out the entire population of an enemy has startlingly diminished.
In 1962, the concept of mutually assured destruction started to play a major part in the defence policy of the US. President Kennedy's Secretary of Defense, Robert McNamara, set out in a speech to the American Bar Foundation a theory of flexible nuclear response.
In essence it meant stockpiling a huge nuclear arsenal. In the event of a Soviet attack the US would have enough nuclear firepower to survive a first wave of nuclear strikes and strike back. The response would be so massive that the enemy would suffer "assured destruction".
Thus the true philosophy of nuclear deterrence was established. If the other side knew that initiating a nuclear strike would also inevitably lead to their own destruction, they would be irrational to press the button.
Continue reading the main story


Arms race between Soviet Union/Russia and the US since 1962

*The US line only includes warheads in the Department of Defense stockpile, which was declassified in May 2010. Several thousand additional retired but intact warheads are awaiting dismantling, probably 3,500-4,500 as of August 2010.
Source: Bulletin of the Atomic Scientists
In the past, wars had been fought by defeating your opponent on the battlefield by superior use of force. But MAD was a radical departure that trumped the conventional view of war.
The age of MAD heralded a new fear, with citizens knowing that they could be annihilated within a matter of minutes at the touch of a button several thousands of miles away.
"The central thing was the public had no control," says Dr Christopher Laucht, a lecturer in British history at Leeds University. "You were at the mercy of political decision makers. Apart from the fear that one side would do something stupid, there was also the fear of technology and the question of 'what if an accident happened'."

Eight months after McNamara's speech the notion of MAD was almost put to the test by the Cuban Missile Crisis. In the end both superpowers gave ground and the problem was averted but mankind had never come so close to doomsday.
Following a period of Cold War detente in the 1970s, tension rose again in the 1980s. By this point the Soviet Union had many more warheads, and it was commonly said that there were enough nuclear arms on Earth to wipe the planet out several times.
The fear of impending attack became a part of everyday conversation. Children speculated in the playground about the first signs of a nuclear attack - hair and fingernails falling out - and whether one could survive a nuclear winter.
In 1983 there were a number of Russian false alarms. The Soviet Union's early warning system mistakenly picked up a US missile coming into USSR airspace. In the same year, Nato's military planning operation Able Archer led some Russian commanders to conclude that a Nato nuclear launch was imminent.
A string of films and TV series in the 1980s - from WarGames, Threads, and When the Wind Blows - reflected these fears.

On the set of Stanley Kubrick's Dr Strangelove or How I Learned to Stop Worrying and Love the Bomb
Sometimes the black humour emanated from unlikely places. In 1984 President Ronald Reagan famously said in a radio soundcheck: "My fellow Americans, I'm pleased to tell you today that I've signed legislation that will outlaw Russia forever. We begin bombing in five minutes." 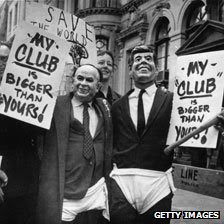 Protesters in Khrushchev and Kennedy masks in 1962
The authorities tried to offer reassurance. In the UK a famous public information campaign Protect and Survive gave people advice on how to build a nuclear shelter. It was later satirised by When the Wind Blows, which portrayed an elderly couple building their shelter and perishing in the nuclear aftermath.

"In the Cold War there was a small risk of utter nuclear catastrophe," says Paul Rogers, professor of peace studies at Bradford University.
Today the risk is not so much armageddon but a "slippery slope" of proliferation, he says. North Korea is thought to have around 10 warheads, Rogers notes, while Iran is thought to be close to a nuclear bomb.
Some have speculated Saudi Arabia could follow if Iran succeeds and it's been suggested that Israel already has more than 100 warheads.

In the National Review, Clifford D May writes: "During the Cold War, the United States adopted a strategic doctrine called MAD: Mutually Assured Destruction. The logic behind it was both perverse and compelling: So long as we were vulnerable to missile attack by the Soviets, and so long as the Soviets were vulnerable to missile attack by us, neither side would benefit by attacking first - on the contrary, a devastating retaliation would be assured. Assuming that both we and the Soviets were rational, the result would be a stand-off, stability, and peaceful coexistence.
"Veterans of the Cold War, still influential in the foreign-policy establishment and the Obama administration, believe that if this kind of deterrence worked then, it can work now.
"Missile-defence advocates - I list myself among them - counter that MAD is an idea whose time has come and gone."
The most serious stand-off today is not the US and Russia but the prospect of a nuclear exchange between India and Pakistan in which "tens of millions would die", Rogers suggests. And the danger in any of these regional disputes is that the US and Russia get sucked in and what began as a war between two neighbours goes global.
"The fear of nuclear war has diminished partly because the risk has receded significantly with the end of the Cold War," says Nick Bostrum, director of Oxford University's Future of Humanity Institute. "But another factor might be simple changes in risk fashion - it becoming more popular recently to worry about global warming, for example."
More immediate worries are terrorist attack, pandemic disease, and economic meltdown.
Robert Harris in his recent novel The Fear Index examined the modern anxiety that fuses the threat of powerful technology with unbridled financial markets.
The main character, who runs a hedge fund, remarks: "Fear is driving the world as never before... The rise in market volatility, in our opinion, is a function of digitalisation, which is exaggerating human mood swings by the unprecedented dissemination of information via the internet."
These are modern fears that John F Kennedy and Nikita Khrushchev, leading the superpowers at the height of the Cuban Missile Crisis, would struggle to comprehend.
But the end of the Cold War hasn't removed the nuclear warheads. Relations between Russia and the West have deteriorated in recent years. China, whose nuclear programme is little understood in the West, is doubling its military spending. India and Pakistan remains a potential flashpoint. So why don't people fear nuclear war as they used to?
For many analysts the world is now a less stable place than it was during the Cold War. And all the major geopolitical confrontations still revolve around nuclear weapons, says Dr Nick Ritchie, lecturer in international security at the University of York.
"At least several hundred American and Russian nuclear missiles remain on 'hard alert' capable of being launched within minutes. Even if that isn't necessarily the policy or intent, the systems and practices remain in place."
The ghost of MAD remains even if people would rather not think about it.
Your comments (342)

When was the only relevant question. Nothing else really mattered until the Berlin Wall Fell and the Soviet Union Collapsed. Even people in Russia were relieved because even if economically things weren't the best at least mutually assured destruction was over.

I must say, living every day as if it was your last was pretty common in young people under 30 from the 1950s until the 1990s when things finally calmed down for one decade before it all went to hell again in 2001  on 9-11. So, understanding the angst, terror and fear in everyone from the 1930s until the 1990s might be the most important thing to understand about people who lived through these times. And Yes, there were always people who were unrealistic and lived in a fairy tale as well during those times. These days, in comparison there is much less to worry about relatively speaking. The only consolation for all of us then was that a nuclear apocalyptic death where everyone turned to dust at once would likely be quick.

During the 1971 Earthquake because it went on for so long I began to believe I was in a Nuclear Blast. It was one of the most terrifying experiences of my life in this sense for several minutes:

I wrote something called: "Death Metal: An Apocalyptic Story

because I believe if it actually came to pass that this story is actually more realistic about what someone partially sane would actually do to take over a country because Mutually assured destruction is basically world suicide and not logical in any way.

What I find interesting is that setting off a 100 megaton hydrogen bomb at 100 miles up is similar to what would actually happen if oil stopped flowing worldwide for any reason, except that oil, if it stopped flowing worldwide wouldn't take out 1/3 to 1/2 of the population of that country in the first month to 6 months like the EMP of a 100 megaton hydrogen bomb going off 100 miles up  would. But, the chaos and transition to wind power, solar power and horses and bicycles and horse carts and carriages would come directly from both occurrences.

Email ThisBlogThis!Share to TwitterShare to FacebookShare to Pinterest
Labels: Did We Forget About Mutually Assured Destruction?