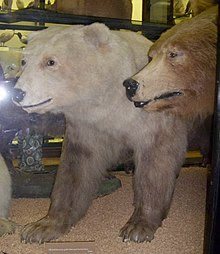 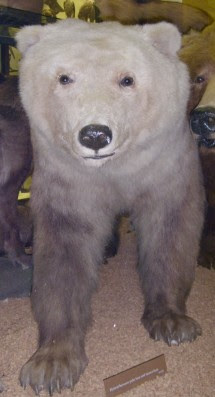 Polar/brown bear hybrid, Rothschild Museum, Tring
A grizzly–polar bear hybrid (also pizzly bear, prizzly bear, or grolar bear[1][2]) is a rare ursid hybrid that has occurred both in captivity and in the wild. In 2006, the occurrence of this hybrid in nature was confirmed by testing the DNA for a strange-looking bear that had been shot near Sachs Harbour, Northwest Territories on Banks Island in the Canadian Arctic.[3]
Ursid hybrids, a term that designates any hybrid of two species within the family Ursidae, include several other types of polar bear hybrids. Polar bear hybrids with grizzly bears in the wild have been reported and shot in the past as well, but DNA techniques were not available to verify the bears' ancestry.


[edit] Occurrences in the wild

With three confirmed cases and other suspected sightings,[4] zoologists are hypothesizing how wild hybrids might come into being. Although the two species are genetically similar and often found in the same territories, they tend to avoid each other in the wild. They also fill different ecological niches. Grizzlies (and also Kodiak bears and "Alaskan brown bears", which are all subspecies of the brown bear, Ursus arctos), tend to live and breed on land. Polar bears prefer the water and ice, usually breeding on the ice. The yellowish-white MacFarlane's bear, a mysterious animal known only from one specimen acquired in 1864, seems to attest that grizzly-polar bear hybrids may have always occurred from time to time. Another theory suggests that the polar bears have been driven southward by the melting of the ice cap, bringing them into closer contact with grizzly bears.

Jim Martell, a hunter from Idaho, found and shot a grizzly–polar bear hybrid near Sachs Harbour on Banks Island, Northwest Territories, Canada, reportedly on 16 April 2006.[1][3] Martell had been hunting for polar bears with an official license and a guide, at a cost of $45,450,[5] and killed the animal believing it to be a normal polar bear. Officials took interest in the creature after noticing it had thick, creamy white fur, typical of polar bears, as well as long claws; a humped back; a shallow face; and brown patches around its eyes, nose, and back, and having patches on one foot, which are all traits of grizzly bears. If the bear had been adjudicated to be a grizzly, the hunter would have faced a possible CAN$1,000 fine and up to a year in jail.[6]
A DNA test conducted by the Wildlife Genetics International in British Columbia confirmed it was a hybrid, with the mother a polar bear and the father a grizzly.[3] It is the first documented case in the wild,[7] though it was known that this hybrid was biologically possible and other ursid hybrids have been bred in zoos in the past.
Amidst much controversy, the bear has since been returned to Martell.[8][9]

On 8 April 2010, David Kuptana, an Inuvialuit hunter from the nearby community of Ulukhaktok on Victoria Island shot what he thought was a polar bear. After inspecting the bear and having DNA testing done, it was found that the bear's mother was a grizzly-polar hybrid and the father was a grizzly bear. The Department of Environment and Natural Resources for the NWT said that it "...may be the first recorded second-generation polar-grizzly bear hybrid found in the wild."[10] The bear possesses physical characteristics intermediate between grizzlies and polar bears, such as brown fur on its paws, long claws and a grizzly-like head.

Biologists affiliated with the American Museum of Natural History and City College of the City University of New York have prepared a new report published in Canadian Field Naturalist that offers the first documented evidence that grizzlies are migrating into polar bear territory. Researchers found that seven grizzlies had been spotted in Wapusk National Park south of Churchill, Manitoba, between 2003 and 2008.[11][12] 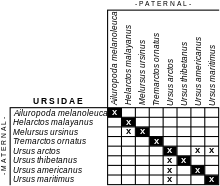 Possible hybridisation between different species of bear
Since the 2006 discovery placed the hybrid into the spotlight, the media have referred to this animal with several portmanteau names, such as pizzly, grolar bear,[13] and polizzly, but there is no consensus on the use of any one of these terms. Canadian wildlife officials have suggested calling the hybrid "nanulak", taken from the Inuit names for polar bear (nanuk) and grizzly bear (aklak).[14] By one convention[15] the name of the sire comes first in such combinations: the offspring of a male polar bear and a female grizzly would be the suggested nanulak or a "pizzly bear", while the offspring of a male grizzly and a female polar bear would be a "grolar bear" or possibly an aknuk. If the remains of MacFarlane's 1864 specimen - which was validly described according to ICZN rules - would be traced and confirmed to be such a hybrid by ancient DNA techniques, the scientific name Ursus × inopinatus would be available for these animals.

Two grizzly–polar bear hybrids were born at Osnabrück Zoo, Osnabrück, Germany, in 2004 (one female and one male), and their physical traits are generally an intermediate between the polar bear and the grizzly bear.[16] For example, their bodies are smaller than polar bears, but larger than grizzlies, while their heads fall between the broader grizzly head and the leaner polar bear head.[16] They have long necks like polar bears, but small shoulder humps like grizzlies.[16] The soles of the hybrids' feet are partially covered in hair; polar bears have hair-covered soles, which act as insulation, and grizzlies have hairless soles.[16] Similarly, the hair of the hybrids exhibits a pattern of hollowness, which blends the traits of both polar bears and grizzlies. In cross section, the hair of polar bears is hollow, while the hair of grizzlies is either solid or has small hollow regions.[16] This varies according to which part of the grizzly the hair is located.[16] In the hybrid male, the paw hair was solid, but the dark back hair was somewhat hollow, albeit with "smaller empty regions than found in polar bear hair".[16] The hair of the female hybrid, "contains a range of hollow regions".[16]
The hybrids demonstrated behavior more similar to polar bears than grizzlies. They stamped toys similar to how polar bears break ice, and hurled bags to the side "as polar bears may hurl prey".[16] Grizzlies given the same bags do not demonstrate this hurling behavior.[16] The hybrids were also observed lying down similar to polar bears: on their stomachs with rear legs splayed.[16]

end quote from Wikipedia under the heading "Grizzly-Polar bear hybrid".

Since I was already writing about true bear stories from my family and friends and myself between Washington State and Yellowstone and California, in True Bear Stories 1920s to Present Day   I saw something about polar bears and Grizzlies getting together so I thought I would share what I learned today.

Note: When it comes to naming the hybrid I prefer Grolar Bears or Nanulak from the Inuit language