Shrinking polar ice caps may be to blame for frigid Europe

Europe's deadly cold snap may have a lot to do with shrinking amounts of ice in the Arctic, a recent study suggests.
Nearly 300 deaths have been reported across the continent, with snow accumulations not seen in five decades reported in some places. Warsaw, Poland, has seen 11 days of temperatures well below average, with a coldest reading of 35 below zero Fahrenheit. 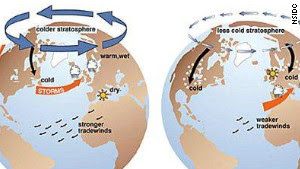 As warmer air rises into the stratosphere over the Arctic, colder surface air moves south bringing storms to Europe.
Scientists at the Alfred Wegener Institute for Polar and Marine Research in Potsdam, Germany, say the frigid, snowy European winter has its origins in a warm Arctic summer.
The U.S. National Oceanic and Atmospheric Administration reported that July 2011 was the fourth-warmest July on record. A warm summer in the Arctic cuts the amount of sea ice. NOAA reports that sea-ice levels last July were the lowest in three decades.
The effect is twofold, the Wegener scientists report.
First, less ice means less solar heat is reflected back into the atmosphere. Rather, it is absorbed into the darker ocean waters. Second, once that heat is in the ocean, the reduced ice cap allows the heat to more easily escape into the air just above the ocean's surface.
Because warmer air tends to rise, the moisture-laden air near the ocean's surface rises, creating instability in the atmosphere and changing air-pressure patterns, the scientists say.
One pattern, called the Arctic Oscillation, normally pushes warm Atlantic air over Europe and keeps Arctic air over the poles.
But in mid-January this year, the Arctic Oscillation abruptly changed, allowing the jet stream to plunge into Siberia and push cold and snowy weather over much of Europe.
Similar situations have emerged the past two years.
Check out some more reports on what this winter's been like, both in the U.S. and around the world:
Frigid weather helps cost Romania's prime minister his job

End quotes.
yes. I agree with this article. It is as if someone set up a giant fan and blew the winter in North America all the way to Russia and Europe and into Northern Africa. Because where I live on the northern California coast we are getting 65 and 70 degree Fahrenheit and above temperatures. Normal would be anywhere from 45 to 60 instead. So we are 15 to 20 degrees above normal or about what Southern California should  be in April or March. But we are on the northern Coast. What gives? Also, no rain to speak of  except 2 storms, one around October and one in January. Also, no snow to speak of, 30 inches or less in the Sierras and southern Cascades that start with Mt. Shasta and go up into Oregon and beyond. So, I would say from Eugene Oregon to Ashland somewhere south into Mexico weather is sort of more in a drought cycle. So, unless some storms make it through in the next few months it might be the worst drought I have ever seen in Northern  California.
Posted by intuitivefred888 at 12:32 AM