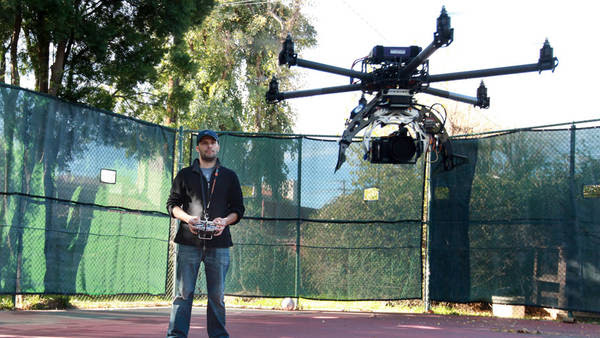 Drones for Hire: Authorities are coming to terms with a commercial drone industry that has emerged in recent years.

By NICK WINGFIELD and SOMINI SENGUPTA

“I was paying the bills with this,” said Mr. Gárate, who recently gave an unpaid demonstration of his drone in this Southern California suburb.
His career will soon get back on track. A new federal law, signed by the president on Tuesday, compels the Federal Aviation Administration to allow drones to be used for all sorts of commercial endeavors — from selling real estate and dusting crops, to monitoring oil spills and wildlife, even shooting Hollywood films. Local police and emergency services will also be freer to send up their own drones.
But while businesses, and drone manufacturers especially, are celebrating the opening of the skies to these unmanned aerial vehicles, the law raises new worries about how much detail the drones will capture about lives down below — and what will be done with that information. Safety concerns like midair collisions and property damage on the ground are also an issue.
American courts have generally permitted surveillance of private property from public airspace. But scholars of privacy law expect that the likely proliferation of drones will force Americans to re-examine how much surveillance they are comfortable with.
“As privacy law stands today, you don’t have a reasonable expectation of privacy while out in public, nor almost anywhere visible from a public vantage,” said Ryan Calo, director of privacy and robotics at the Center for Internet and Society at Stanford University. “I don’t think this doctrine makes sense, and I think the widespread availability of drones will drive home why to lawmakers, courts and the public.”
Some questions likely to come up: Can a drone flying over a house pick up heat from a lamp used to grow marijuana inside, or take pictures from outside someone’s third-floor fire escape? Can images taken from a drone be sold to a third party, and how long can they be kept?
Drone proponents say the privacy concerns are overblown. Randy McDaniel, chief deputy of the Montgomery County Sheriff’s Department in Conroe, Tex., near Houston, whose agency bought a drone to use for various law enforcement operations, dismissed worries about surveillance, saying everyone everywhere can be photographed with cellphone cameras anyway. “We don’t spy on people,” he said. “We worry about criminal elements.”
Still, the American Civil Liberties Union and other advocacy groups are calling for new protections against what the A.C.L.U. has said could be “routine aerial surveillance of American life.”
Under the new law, within 90 days, the F.A.A. must allow police and first responders to fly drones under 4.4 pounds, as long as they keep them under an altitude of 400 feet and meet other requirements. The agency must also allow for “the safe integration” of all kinds of drones into American airspace, including those for commercial uses, by Sept. 30, 2015. And it must come up with a plan for certifying operators and handling airspace safety issues, among other rules.
The new law, part of a broader financing bill for the F.A.A., came after intense lobbying by drone makers and potential customers.
The agency probably will not be making privacy rules for drones. Although federal law until now had prohibited drones except for recreational use or for some waiver-specific law enforcement purposes, the agency has issued only warnings, never penalties, for unauthorized uses, a spokeswoman said. The agency was reviewing the law’s language, the spokeswoman said.
For drone makers, the change in the law comes at a particularly good time. With the winding-down of the war in Afghanistan, where drones have been used to gather intelligence and fire missiles, these manufacturers have been awaiting lucrative new opportunities at home. The market for drones is valued at $5.9 billion and is expected to double in the next decade, according to industry figures. Drones can cost millions of dollars for the most sophisticated varieties to as little as $300 for one that can be piloted from an iPhone.
“We see a huge potential market,” said Ben Gielow of the Association for Unmanned Vehicle Systems International, a drone maker trade group.
For Patrick Egan, who represents small businesses and others in his work for the Remote Control Aerial Photography Association in Sacramento, the new law also can’t come fast enough. Until 2007, when the federal agency began warning against nonrecreational use of drones, he made up to $2,000 an hour using a drone to photograph crops for farmers, helping them spot irrigation leaks. “I’ve got organic farmers screaming for me to come out,” he said.
The Montgomery County Sheriff’s Department in Texas bought its 50-pound drone in October from Vanguard Defense Industries, a company founded by Michael Buscher, who built drones for the army, and then sold them to an oil company whose ships were threatened by pirates in the Gulf of Aden. The company custom-built the drone, which takes pictures by day and senses heat sources at night. It cost $300,000, a fraction of the cost of a helicopter.end quote from:
http://www.nytimes.com/2012/02/18/technology/drones-with-an-eye-on-the-public-cleared-to-fly.html
So, the next time in your remote vacation cabin with a pool you want to go skinny dipping day or night you can't be sure that someone won't film you from the air very quietly day or night. So, whether it is online or from above anywhere you go, it is possible that you will be spied on both inside and outside from now on. And as nanobots are developed when will we know when they are added to our food so we can be spied on inside our bodies as well? Welcome to a Brave new world none of us could have ever made up in our wildest dreams both good and bad! Also, I think if people are intrusive they should also expect their drones to be shot down by Paint ball air guns,  BB guns, air rifles, dart guns,  bows and arrows small focused EMP generators to knock out electricity which would cause a drone to crash, Lasers  and even by pistols and rifles in some cases. It should get very interesting soon!

Days Later: I had another thought that even though something like this is worth $5000 or more I could also see a flying robot trailing a sign or advertisement banner like planes now do. I could also see a flying robot dragging a target for shooting paint ball guns at in order to better hit a moving target and to increase accuracy for shooting at moving targets.
Posted by intuitivefred888 at 11:45 PM

Email ThisBlogThis!Share to TwitterShare to FacebookShare to Pinterest
Labels: Drones For Hire