I was thinking about researching more about the actual size of Eagles to develop the story of Silver and Bret more. So far, this is one thing I found interesting. This is a picture of an Eagle Drone used
in Idaho to scare Seagulls away. It reminded me enough of my drone idea in "As Drones Evolve to show it to you here. 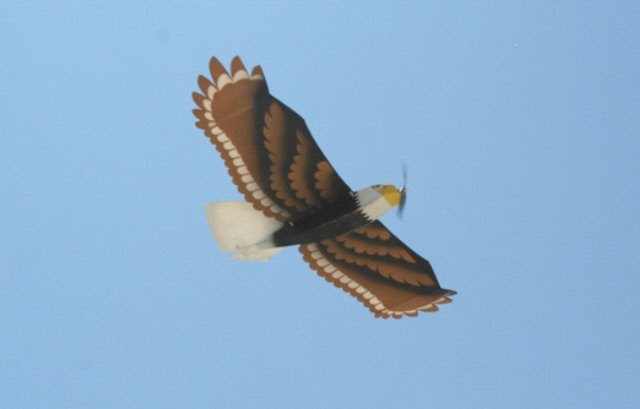 Officials at the Pickles Butte Landfill in Caldwell, Idaho are using Avian Mitigation Drones, which, in other words, are remote-controlled eagles that are keeping the birds away from the landfill.
“You’d be surprised how well this works,” said Jack Biddle, landfill director. “The first time we flew one of the eagles, within seconds there was a flock of seagulls scrambling to get away from it.” 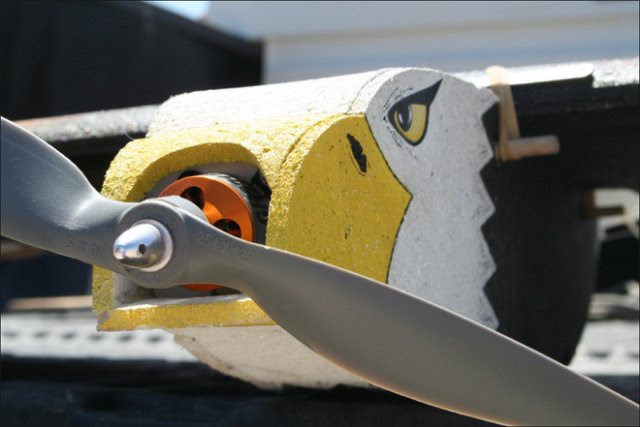 The so-called Avian Mitigation Drones are made out of expanded polypropylene, a durable type of foam. Their bodies are approximately two and a half feet long with close to about a five-foot wingspan. 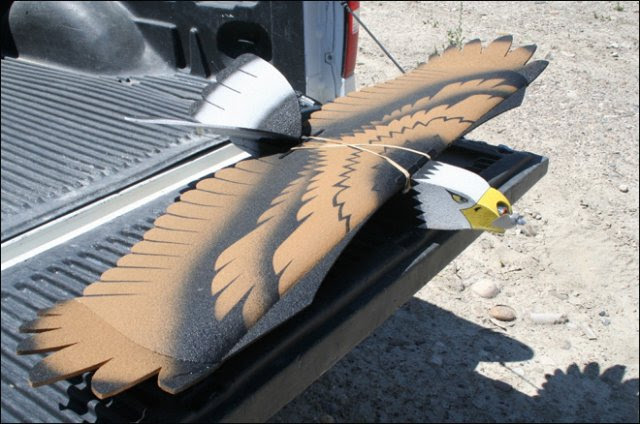 They were purchased from a company in Taiwan, China and cost about $135 per fake eagle body. The landfill currently owns two drones.
The seagulls are considered a nuisance because when they’re airborne the droppings can pose a possible health risk – as well as an unpleasant mess.
The fake eagles are only able to fly with little or no wind.
The landfill staff also use kites, firecracker type blanks, whistlers and the application of daily soil cover to help control the seagulls.

end quote from:
http://www.uasvision.com/2012/08/06/avian-mitigation-drones-to-scare-seagulls/
Here is what I found so far on actual living  Eagles:

Color - Both male and female adult bald eagles have a blackish-brown back and breast; a white head, neck, and tail; and yellow feet and beak.
Juvenile bald eagles are a mixture of brown and white; with a black beak in young birds. The adult plumage develops when they are sexually mature. It takes about five years for their head and tail feathers to gradually turn white.
The bald eagle is the only eagle confined to North America. There are no other large blackish-brown birds with a white head and tail in North American.

So, I am imagining a 90 inch wingspan and a 37 inch body on Silver's and Bret's Eagle Drone. So, you have 37 inches (3 feet and 1 inch in the body length and then 90 inches of wingspan which is a good sized eagle. With wings permanently outstretched this provides a lot of lift. Then imagine putting solar cells along the complete top of the body, an electric motor spinning the propeller and lightweight batteries of the highest capacity that won't catch fire. And then the little gas engine must have a starter motor run from the battery. When the engine turns on it takes about 2 minutes of the gas engine turning on to completely charge up the battery. So, when you combine a miniaturized version of the Solar Impulse from Switzerland combined in an Eagle body 37 inches long with a 90 inch wingspan, you have something fairly formidable in size that can fly possibly a long distance if designed properly, with the only addition being the gas engine and a little electric starter for it and a little generator or alternator built into the gas engine.

So into that 3d printer formed plastic Eagle Body 37 inches tall we hollow the body out enough to place a propeller on an electric motor (either on the very tip of the front beak or on a platform above the neck and shoulders at an angle compensating for  it's location above the eagle. All this would have been run through a wind tunnel to create ultimate performance in all kinds of wind buffeting to attain great gliding characteristics while at the same time optimizing speed in dives when necessary, possibly reinforcing the wind strength with a piece of Aluminum finger thickness or greater as a single piece within both wings and going through the very top of the fuselage for strength to integrate fuselage and wings for high speed buffeting in winds from any direction. The eagle should withstand 100 mph dives and be able to maintain 50 or more miles per hour in level flight at full electric power without draining the batteries during the daylight hours. So, that the solar panels create more electricity than the eagle can used during level flight or gliding or even gaining up to 1000 feet every hour or so while flying. The entire upper part of the eagles body (wings, upper fuselage and top of tail would have the latest solar panels generating constant optimum performance on sunny days.

Also, there would need to be a removable piece that looks like an eagle chest and lower body that fits over all electrical and camera and engine and battery components so at an altitude of 1000 plus feet or more above the ground there is really nothing to distinguish this drone from a real eagle in a glide pattern.

So, the aerodynamic characteristics of the wings would depend upon what allowed for optimum glide combined with keeping the wings on during a 45 degree angle dive away from danger of up to 100 mph to get out of the way of storms, bad winds or people shooting at it thinking it was a real hawk or eagle.

So using a 3d printer you would first create a prototype of the Eagle body from head to tail.
Next, you would create the wings one at a time using the 3d printer and then find a way to reinforce the wings in relation to each other with a strip of aluminum at least 6 feet long to tie it all together with strength. So, your 3d printer would have to be able to accommodate at least something 45 to 50 inches long in order to create it this size. Of course if your printer only does 3 foot diameter objects you could reduce the wings size as well as the body and head and tail piece in one piece.

Also, since almost any starter motor for any gas engine is a drain on the battery I was thinking that it might be best to trigger the starter to start the gas engine when the battery reaches 1/2 capacity rather than 1/4 capacity. Though it might cause the engine to burn more gas, it would also optimize the chance of the engine starting quickly each time to run to charge up the battery at night when the sun isn't out or in some other type of temporary emergency for the batteries.

If you were designing an Eagle to be completely solar powered in the vein of Solar Impulse from Switzerland you would build the whole thing differently. You would not be going for speed, instead you would go for something that could stay aloft 24 hours a day instead. So, you wouldn't care about anything but the weather at that point. You would design for maximum amount of solar panels on a vehicle and go for electric motors and the best batteries you could find that were light. However, if you were in a high wind that might be a problem like in a storm flying this thing because you wouldn't have the sun and it might tear the wings off.
I thought I would share what I've written so far in "As Drones Evolve". Here it is:AS DRONES EVOLVE: FICTION? I've had time lately to write more on it and have been having fun writing it.

Later: As I thought more about this and also researched the prices of 3d printers and realized that domestic ones that only "print" 12 inch by 12 inch models are about 1200 dollars I had to also rethink this whole process for the average person. There might be a way by making parts of a wing or body(fuselage) in pieces so that the fuselage might be say 3 pieces and the wings might be several pieces as well as long as shanks were including to insert one piece into another with enough strength to bind the whole thing together. But likely creating wings in several pieces likely would weaken them further than having them in one piece unless they were really well designed.

Also, when I saw that people are making plastic locks that actually work with a plastic key as padlocks now with 3d printers I can also see that the only limit with these printers is one's imagination combined with the laws of physics.