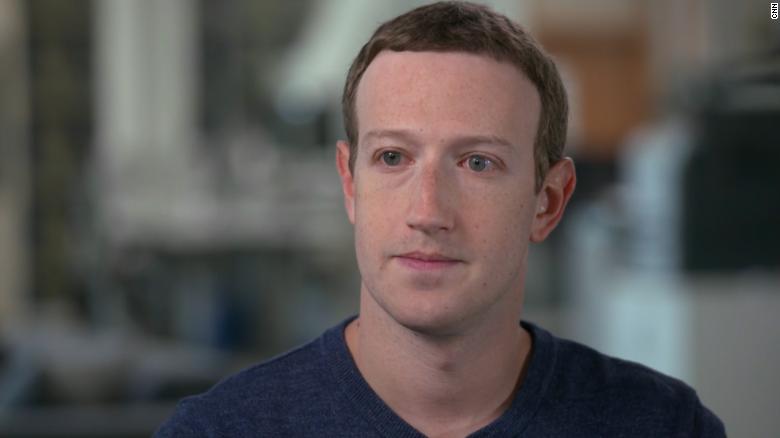 Trump clashes with media after the election

Off-roading in the world's most expensive SUV

A tale of two minimum wages

Why the American toy industry is hurting

Could trash power your home?

Why home builder stocks are getting crushed

Is Google a monopoly?

Trump clashes with media after the election

Off-roading in the world's most expensive SUV

A tale of two minimum wages

Why the American toy industry is hurting

Could trash power your home?

Why home builder stocks are getting crushed

Is Google a monopoly?

London (CNN Business)An American app developer who gave confidential documents about Facebook to UK lawmakers during a visit to London says he did so because he panicked and feared he wouldn't be let out of the country unless he complied.
Court papers filed Monday in California detail a twisting, tangled tale of intrigue that Six4Three owner Ted Kramer claims led him to hand over the documents to a parliamentary committeeinvestigating Facebook, even though a California court ordered that the documents must remain under seal.
The documents are significant in part because some of them may contain correspondence between Facebook CEO Mark Zuckerberg and company executives. Kramer has them because his company sued Facebook and accused the social media giant of having a disregard for user privacy. Six4Three also claimed that Zuckerberg devised a plan that forced some of Facebook's rivals, or potential rivals, out of business.
Facebook had fought for months to keep the documents from being made public. It's now possible that their contents could be revealed during the committee's hearing this week.
In Monday's court filing, Kramer's lawyers claimed that during a recent trip to London, he resisted demands from UK lawmaker Damian Collins that he give Collins the documents. But Kramer eventually "panicked" after a UK official showed up at his hotel room and ordered him to surrender the documents, the filing says.
Facebook and Six4Three declined to comment. Collins, who heads the committee investigating Facebook, did not immediately respond to requests for comment.

How the documents ended up in the United Kingdom

Kramer's story begins with Carole Cadwalladr, a reporter for The Guardian who has covered Facebook and the Cambridge Analytica data scandal. His attorneys suggested in Monday's court filing that she somehow tipped off members of the UK parliament to Kramer's movements so they would know when he was in the country.
According to the court filing, Cadwalladr told Kramer in August "that she would like to raise Six4Three's case with Damian Collins." A few months later, Collins told Kramer that Cadwalladr told him about the Facebook-related documents in Kramer's possession.
At the time, Kramer told Collins that he couldn't hand over the documents because they were under seal in California, the filing says.
Things escalated earlier this month. Kramer told Cadwalladr that he was taking a business trip to London. According to Monday's filing, the reporter suggested that they meet to talk about the case. Kramer agreed and gave her the address of his hotel.
Once he arrived, Kramer received an email from Collins and his committee that demanded he produce the documents. The court filing says he declined, citing the California order sealing them.
That back-and-forth culminated in a visit to Kramer's hotel last Wednesday by the Serjeant-at-Arms of the House of Commons, according to the court filing. Kramer's attorneys claim the Serjeant-at-Arms served him with an order demanding that he produce the documents.
The attorneys say their client "does not know how" the committee discovered where he was staying and that the only person he told about the location of his hotel was Cadwalladr.
Monday's court filing does not provide any evidence that Collins learned any information about Kramer's visit from Cadwalladr.
Cadwalladr declined to comment for this article.
After the hotel visit, Kramer received another email from the committee which threatened to hold him in contempt of Parliament, according to the court filing. Fearing that he'd be barred from leaving the country, he eventually went to Parliament to meet with Collins without telling his lawyers.
The filing claims that Collins and his staff kept Kramer "for two hours" and told him "that he was under an active investigation, that he was now in contempt of Parliament, and that the penalty could include fines and potential imprisonment."
"At this point, Mr. Kramer panicked," the filing says. Kramer downloaded the documents to a USB drive and handed them over to the committee.
The court filing notes that neither Kramer's company nor its lawyers "condones or approves of the manner in which Mr. Kramer resolved that dilemma."

Collins said the committee is reviewing the documents — which he has called "clearly of significant interest to the committee's inquiry" — so it can decide how to proceed.
The committee is holding an unprecedented meeting Tuesday during which it will question witnesses on so-called "fake news" and disinformation. The meeting will feature representatives from nine countries and will take place in London. An executive from Facebook is scheduled to attend.
The documents could be made public during the hearing. Members of the UK Parliament have "parliamentary privilege," which gives them a great deal of leeway to discuss issues without legal ramifications.
Facebook is also expected to file a brief about the consequences of Collins' having demanded the documents from Kramer, despite the US court order prohibiting their release, including what issues it may raise under the US Constitution.
Earlier this year, CNN filed jointly with The Guardian a motion in the California court asking for the documents to be unsealed. That motion was not successful. Cadwalladr reports for The Guardian and its sister newspaper The Observer.
Posted by intuitivefred888 at 12:32 AM