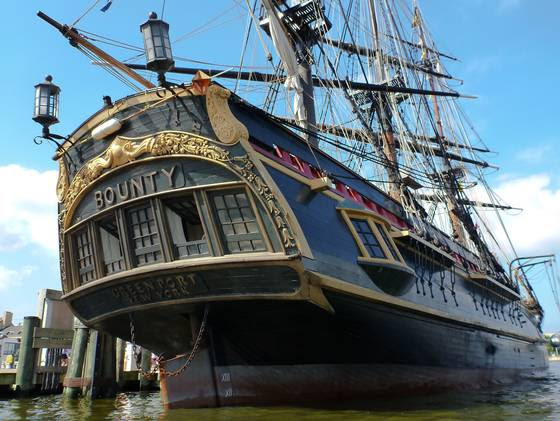 (Photo: Blake Sell, AP)
12:03PM EDT October 29. 2012 - U.S. Coast Guard helicopters battling Hurricane Sandy rescued 14 of 16 crewmembers who abandoned the movie ship HMS Bounty before it sank off North Carolina early Monday, but officials said two people were still missing at sea.
The 180-foot, three-masted ship was built for the 1962 film Mutiny on the Bounty and was also featured in a Pirates of the Caribbean movie, according to the The HMS Bounty Organization website, the Associated Press reported.
The Coast Guard said Monday that all 16 members of the HMS Bounty crew had made it onto life rafts before the three-masted ship sank, but only 14 people were hoisted to safety by the two Jayhawk helicopters dispatched from North Carolina.
It was not immediately clear why the two missing crewmembers were not among those rescued 90 miles southeast of Hatteras, N.C.
Coast Guard Lt. Brendan Selerno said that an expanded air search was underway for the missing pair, who were believed to be in cold water survival suits and life jackets, the CBC reported.
A Coast Guard Hercules C-130 remained on the scene as officials plotted wind direction and speed to aid in the search.
The Coast Guard also said there were only 16 people aboard the ship when it ran into trouble, not 17 as initially reported.
The director of the HMS Bounty Organization, Tracie Simonin, said the tall ship had left Connecticut last week en route for St. Petersburg, Fla., the Associated Press reported.
"They were staying in constant contact with the National Hurricane Center," she said. "They were trying to make it around the storm."
The first helicopter reached the scene around 6:30 a.m., about 90 minutes after the crew abandoned ship, and hoisted five people aboard. The second chopper plucked nine people from a second life raft.
The 14 were safely back at the Coast Guard Air Station Elizabeth City, N.C., by mid-morning, WITN-TV reported.
WATCH: HMS Bounty in rough seas two years ago
The crew abandoned the ship, which had lost propulsion, after it began taking on water, the Coast Guard said, according to the Associated Press.

Hatteras, N.C.
The ship was trapped in 40 mph winds and 18-foot seas about 160 miles west of the eye of the hurricane, according to a Coast Guard statement.
Coast Guard Vice Adm. Robert Parker, Operational Commander for the Atlantic Area, told ABC's Good Morning America that at the time of the distress call, the ship was taking on two feet of water an hour. It had about 10 feet of water when the crew abandoned the ship.
The Coast Guard first received a call Sunday evening from the ship's owner who said she had lost communication with the crew.
A signal from the ship's emergency radio beacon later confirmed that the vessel was in distress and gave its position.
Here is how HMS Bounty Facebook page described what happened:


We received a distress call for Bounty at 1830 Sunday evening that the Ship lost power and the pumps were unable to keep up with the dewatering. At that time we immediately contacted the USCG for assistance.

The HMS Bounty Organization website said the ship was built for the 1962 film Mutiny on the Bounty, which starred Marlin Brando. The ship was also used in the film Pirates of the Caribbean: Dead Man's Chest., the AP reported.

This is an amazing "Replica" ship. I have walked on board it and down below and it is an amazing ship. I'm sorry to hear about the two missing crew members. My wife used to "crew" years ago on another replica ship the " The Californian"

From Wikipedia, the free encyclopedia
Jump to: navigation, search
For other ships of the same name, see Californian (ship).
Californian was built in 1984 as a replica of the revenue service cutter C.W. Lawrence, which operated off the Californian coast in the 1850s. On July 23, 2003, Governor Arnold Schwarzenegger signed Bill No. 965, making her the "official state tall ship" of California.[2]
Originally commissioned by the Nautical Heritage Society, she has flown the flag of California up and down the coast and in ports ranging from Hawaii, Mexico, and the East Coast. She also represented the state at the 1984 Summer Olympics in Los Angeles.[2] The model for her figurehead was actress Catherine Bach, who was chosen as she was descended from one of the state's early families.[3]
Recently acquired by the Maritime Museum of San Diego, she underwent a complete overhaul and has now returned to providing sail training and sea educational programs up and down the Californian coast. The public can go on a sail every Saturday in the summer.

The Californian
Posted by intuitivefred888 at 10:32 AM

Email ThisBlogThis!Share to TwitterShare to FacebookShare to Pinterest
Labels: 2 missing from Crew of U.S. Ship Bounty