This story is part of Hurricane Sandy 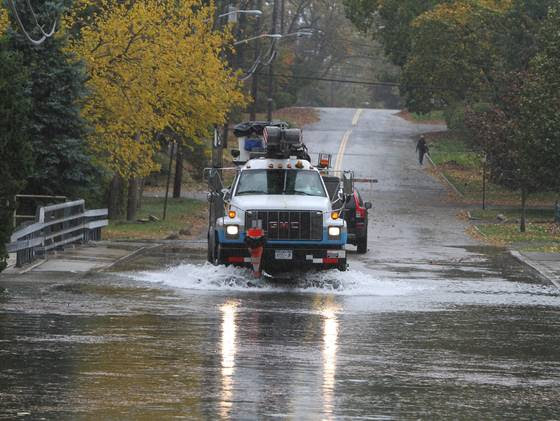 1:53PM EDT October 29. 2012 - NEW YORK -- The nation's largest city braced for Hurricane Sandy as forecasters said the monster storm picked up strength and was headed toward the New York region, packing high winds and rain and a wall of water that could reach 11 feet.
Sandy is starting to move faster and could make landfall in New Jersey as early as 5:00 p.m., the Weather Channel reported.
The storm has strengthened as it moves along the Eastern Seaboard threatening some 50 million people, many who have evacuated coastal cities.
Winds have been measured at 90 mph, which is a strong Category 1 storm, according to the National Hurricane Center. Wind gusts were reported as high as 115 mph.
Sandy remains a monster storm as tropical-storm-force winds of at least 39-73 mph are being felt all the way from southern Maine to the Outer Banks of North Carolina.
The storm is gaining energy from other weather systems and is combining to create a superstorm with the potential for devastation over 800 miles from the East Coast to the Great Lakes. About 2 to 3 feet of snow were forecast for mountainous parts of West Virginia, Maryland, and Virginia.
"History is being written as an extreme weather event continues to unfold, one which will occupy a place in the annals of weather history as one of the most extraordinary to have affected the United States," said meteorologist Stu Ostro of the Weather Channel.
Sandy's storm surge already pushed tides over seven feet in New York City shortly before the arrival of Monday morning's high tide, the National Weather Service said. The surge added roughly three feet to the high tide, which was already higher than normal as a result of the full moon, said meteorologist Jeff Tongue.
"We think the peak of the surge will be as Sandy comes ashore tonight," with a roughly six-foot surge added to the nighttime high tide, he said.
"It's a once in a lifetime storm," Tongue said. "I've been doing this for 30 years, and I've never seen anything like this."

Flooding has already impacted some parts of the New York metropolitan area. The city is closing both the Hugh L. Carey Tunnel that links Manhattan and Brooklyn, and the Holland Tunnel between Manhattan and Jersey City in New Jersey.
Highways, mass transit and bridges have closed. The financial district was shut down. And Mayor Michael Bloomberg said public schools would remain closed Tuesday.

New York Gov. Andrew Cuomo said he made the decision to close the tunnels because they are prone to flooding during heavy storms. The city storm surge from Hurricane Sandy is already at the level of the surge during Hurricane Irene last year, even though Sandy is still hundreds of miles away, Cuomo said.
STORM: NYC braces for damage
DAMAGE: Costs could be historic
LIVE TRACKER: See where Sandy is now, where it's headed
"The worst is still coming," he said during a morning news conference at which he urged New Yorkers to stay home and away from highways and the coastline. "You do not need to be going to the beach to take pictures."
Reginaldo Machado, 38, of Mamaroneck, N.Y., in Westchester County was at Harbor Island Park taking photographs of the flooding that was swallowing park benches at about 10:15 a.m. He said he plans to stay home with his wife and two daughters.
"I'm a little bit scared," he said.
Early Monday the Coast Guard rescued 14 of at least 16 people aboard a vessel approximately 90 miles southeast of Hatteras N.C. Two people remain missing. The replica of the tall ship made famous in the film "Mutiny on the Bounty" eventually sunk, officials said. Survivors managed to get on two lifeboats.

The storm is expected to bring 50 to 75 mph winds, up to 10 inches of rain and potential snowfall of up to two feet over 14 states beginning late Monday afternoon or early evening.
Craig Fugate, administrator for the federal Emergency Management Agency, said Monday the agency has stationed teams from North Carolina to Maine and in states as far inland as West Virginia.
"We've been moving generators, basic supplies, we would need after the storm," he said.
Fugate said he was worried about people evacuating ahead of storm surges.
First there will be the coastal impact, then the wind knocking out power and then heavy rain and flash flooding, he said, adding "we don't want people to think it's not that bad when it comes ashore."
High-wind watches and flood warnings are in effect for all the Mid-Atlantic states and southern New England, where Sandy was expected to barrel through Wednesday.
The New York Stock Exchange dropped its plan to have electronic trading Monday as Hurricane Sandy churned closer to New York City. Exchange officials also said the market will remained closed on Tuesday.
"We support the consensus of the markets and the regulatory community that the dangerous conditions developing as a result of Hurricane Sandy will make it extremely difficult to ensure the safety of our people and communities, and safety must be our first priority" the stock exchange said in a formal announcement. "We will work with the industry to determine the next steps in restoring trading as soon as the situation permits."
A number of major U.S. companies postponed quarterly earnings reports.
At least 9,000 airline flights had been canceled by Monday because of the storm, according to the FlightAware flight-tracking service. That number -- 8,962 as of 9 a.m. ET -- appears certain to grow over the next 24 hours as Sandy moves onshore.

Once Tuesday's cancellation tally is included, it's possible the total could soar over 10,000 and possibly approach the 14,000 Hurricane Irene-related flight cancellations that were reported over a four-day period in August 2011.
President Obama and Gov. Mitt Romney canceled any election stops. Obama flew back to Washington from Florida to monitor the storm.
The brutal force and massive breadth of Hurricane Sandy may leave as many as a record 10 million people in the dark from West Virginia to Maine and even as far west as Chicago.

At least 36,000 people in at least seven states were out of power as of mid-day Monday, according to the U.S. Department of Energy.

Thousands of residents in New Jersey, Virginia and Maryland had already experienced power outages by mid-day Monday but utility workers were rushing to restore electricity to many before expected wind gusts start slamming the region this afternoon.

As of 11:45 a.m. EST, about 53,000 Dominion Virginia Power customers had lost power since Saturday but only 5,500 were still without it, says David Botkins, director of media relations.

"We're actively responding to outages as they occur," he says. "We have to be very careful about putting people in harm's way but so far we've been able to work through it."

The worst is yet to come and utility companies have been preparing for outages of historic magnitude. Thousands of linemen and support crew are on their way from as far away as California and Texas and many already are in set up in staging areas prepared to respond.
"It's changing by the quarter-hour," says Keith Voight, spokesman for the Edison Electric Institute, the association of shareholder-owned electric companies that generate 75% of the power in the U.S. "Forecasters predicted it could become the worst storm to hit the East Coast in 100 years."

Power outages are expected to be the worst, too, affecting as many as 10 million. About 7 million were in the dark when Hurricane Irene hit last year and 5 million after the "derecho" took the Washington area by surprise in June.
Even Chicago 800 miles to the west may feel the wrath of Sandy.

"We're actually preparing right now because we're expecting high winds and high waves on Lake Michigan," says John Schoen, spokesman for ComEd, which provides power to Chicago and its suburbs.
Governors from North Carolina to Connecticut have declared states of emergency.
— In Delaware, Gov. Jack Markell ordered mandatory evacuations for an estimated 50,000 residents of coastal communities. Collin O'Mara, secretary of the Department of Natural Resources and Environmental Control, said Sandy could unleash record waves and tidal flooding along the coast."The potential on this is greater than the defenses that we have in most places," O'Mara said.
— New Jersey Gov. Chris Christie declared a state of emergency and ordered Atlantic City casinos evacuated - just the fourth time the city's 12 casinos had been shut since legalized gambling began 34 years ago. Christie warned state residents to be prepared for several days without electricity.
— Connecticut Gov. Dannel Malloy warned that storm surges could be the worst the state has seen in almost 75 years and urged residents along the shorelines of several cities and towns to heed evacuation orders.

Unfortunately, this storm appears worse on every level than the one that was predicted to hit only 24 hours ago.