By Claudine Zap | The Sideshow – 4 hrs ago 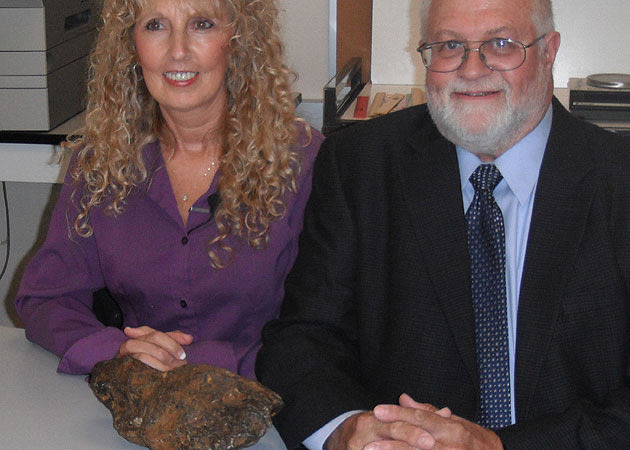 The object of curiosity, which long served as a doorstop and a garden ornament and had even been painted green, turns out to be a very rare and very real meteorite, possibly 4.5 billion years old.
It wasn't until George Lewis put a metal detector to the object—and it read off the charts—that the couple realized this was no ordinary rock.
When the Lewis family brought the object to Jerry Cook, chair of the Department of Physics and Astronomy at Eastern Kentucky University, he suspected it was special.
According to the school's press release, "tests at the University of Tennessee confirmed the object's origins: it was probably part of a known meteorite strike that had first turned up evidence in Tazewell in 1853."
The university has since purchased the meteorite, the remains of a meteor that fell to Earth, from the family. The former doorstop will now be on display. It already made its debut at a science fair on the campus over the weekend.
"We don't want to lock it up somewhere," Cook said in a statement. "We want kids to be able to touch it, lift it, and understand what it is. Part of our job is to get kids interested in science, and this ... will stir their curiosity."
Cook added, "We're extremely lucky to find something like this, and to find one locally is a real plus for us."
The discovery is the second-largest known meteorite from the Tazewell strike. The first weighed in at 100 pounds.
Cook told Yahoo News in an email that the find is extraordinary. "It is extremely rare from my point of view. I have been in Physics and Astronomy Departments for over 40 years and this is the first one I have ever seen come in the door."
For her part, Donna Lewis is thrilled that the space rock will be available to students for study.
The school secretary said, "I saw how excited kids at our school got when they saw it. It's good to know that Eastern will keep it in one piece and students will be able to study it."

Check out this amazing video of a recent meteor shower: