What Notable People Are Tweeting About the Final Presidential Debate

What Notable People Are Tweeting About the Final Presidential Debate 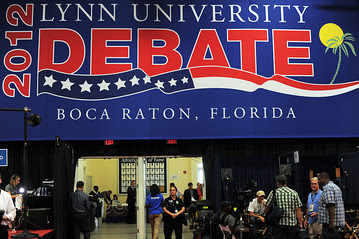 Agence France-Presse/Getty Images
A policewoman guards as members of media work at a filing center at Lynn University in Boca Raton, Florida, on October 22, 2012 ahead of the third and final presidential debate.

The final presidential debate of 2012 between President Barack Obama and GOP challenger Mitt Romney starts at 9 p.m. ET tonight in Boca Raton, Florida, and notable people are already weighing in with predictions and comments about who will win. “It’s almost impossible 2 debate a Liar ! a man who changes his mind,answers,opinions & Beliefs at the drop of a hat!” Cher tweeted, in a series of posts critical of Romney. Meanwhile, mogul Donald Trump tweeted in favor of Romney, and expressed the hope that he’d press the president on Libya.
One guy who is under almost as much pressure as the candidates: host Bob Schieffer, who has to live up to the work done by past Campaign 2012 moderators Candy Crowley, Martha Raddatz, and Jim Lehrer. Already there’s a war brewing on Twitter about whether Schieffer will favor Obama, Romney or stay neutral. Good luck Bob!
Here’s what some notable folks have said on Twitter. What do you think? Share your thoughts in the comments.

Diane Sawyer @DianeSawyer
Final showdown tonight. The question everyone is asking: Which man will emerge the strongest leader on the world stage? #debates

Seth MacFarlane @SethMacFarlane
Obama and Romney should open the next debate with a really well-rehearsed rendition of that "God, I Hope I Get It" song from A Chorus Line.

Michael Moore @MMFlint
Four years from now, this is how the History Channel will look back on the "Romney Presidency" (should he win Nov 6th) youtube.com/watch?v=y9cZ1F…

Joy Behar @JoyVBehar
When Romney proposes a cut in the social safety net, that’s called a Romputation. If you are a victim of such a cut, you are a Romputee.

Mark R. Levin @marklevinshow
Let's see if Bob Schieffer will be able to control his liberal self in tonight's debate... fb.me/2n5Q309ed


What Notable People Are Tweeting About the Final Presidential Debate

What my personal point of view is that Romney has already demonstrated how naive and scary he is in regard to Foreign policy. He already pissed off the English during the Olympics by telling them their security sucks before the Olympics started. Then he went to Israel and confused the Israeli's and pissed off the Palestinians. So, he has already demonstrated to me that he could get us all killed being as naive a potential president regarding Foreign affairs and Foreign policy. He might make another good Governor of Massachusetts but he would be a really scary president regarding anything to do with other countries.