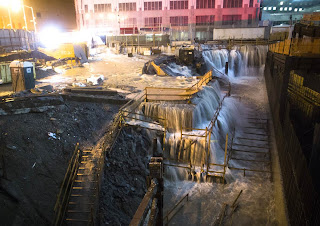 I was watching Governor Cuomo of New York Speak about this on CNN TV while in the background there was this picture that sort of looked like Niagra Falls as the Hudson River flowed into the Subways through the work being done at Ground Zero putting in a new section of Subway there. It was and unbelievable picture. I'll see if I can find it online somewhere. Because in this one section and many others the salt water mixed with fresh water went into the subways there and other places it is questionable how electrically or structurally sound the Subways will be now. They were not electrically or structurally designed for the whole Hudson River to come in like this. So, I think the biggest problem  is: "Are the tunnels safe for humans down there now because of potential structural collapse?" 2nd, "Are the electrical systems and tracks permanently compromised?" In other words "can wet and water eroded soil under the tracks be stable enough for the weight of the trains without derailing or worse at speed?" 3rd regarding the electrical systems, "Can they work? Can they be replaced? How much is all this going to cost and still be possible for electrical, structural, and rail bearing weights to all be safe for humans?" And 4th, the last problem is, "Even if you get all or most of this water out what is the chance of serious black mold forming there underground because even if you pump all the water out moisture will remain embeded in everything. Also, since there is never any sun down there to dry things out all you have is lights and the wind from moving subway trains to dry everything out over time.

I put photo of water from Hudson Flowing into Ground Zero subway station at top. if you click on it with a laptop or desktop computer it should enlarge. (with IPad or other use your fingers to enlarge)

The storm damage has left commuters wondering when it could reopen after Sandy flooded tunnels, brought trees down over tracks and ripped out power lines.

The Metropolitan Transportation Authority said Tuesday it was too soon to say how long the problems would take to fix.

MTA Chairman Joseph Lhota said the 108-year-old subway system "has never faced a disaster as devastating as what we experienced last night."

The agency said all 10 subway tunnels between Manhattan and Brooklyn were underwater during the storm. It said it will be pumping water Tuesday, but workers ultimately will have to walk hundreds of miles of track to inspect it. It's not clear how long that will take.

Trains, however, were moved to safety before the storm.

MTA chairman Joseph J. Lhota said in a statement: "The New York City subway system is 108 years old, but it has never faced a disaster as devastating as what we experienced last night."

Lhota said Hurricane Sandy wreaked havoc on in the entire transportation system, in every borough and county of the region.

As of Monday night, seven subway tunnels under the East River were flooded.

Metro-North Railroad lost power from 59th Street to Croton-Harmon on the Hudson Line and to New Haven on the New Haven Line.

The Long Island Rail Road evacuated its West Side Yards and suffered flooding in one East River tunnel.

The MTA was still in the process of assessing the damage and had no timeline for putting the system back on-line.

Lhota said that the system might be brought back part-by-part as they could get things running.

He said, "Our employees have shown remarkable dedication over the past few days, and I thank them on behalf of every New Yorker. In 108 years, our employees have never faced a challenge like the one that confronts us now. All of us at the MTA are committed to restoring the system as quickly as we can to help bring New York back to normal." Extraordinary: This CCTV photo shows flood waters from Hurricane Sandy rushing in to the Hoboken PATH