Editor's Note:  A 7.7-magnitude quake struck off the coast of Queen Charlotte Islands in Canada late Saturday, triggering a tsunami warning as far as Hawaii. Reports of major damage have not yet emerged. Here are the latest developments:
[Update 1:45 a.m.] Here's a recap: A large quake has hit off the coast of Canada. We have just received news that a tsunami warning has been issued as far as Hawaii. If you know you're in an evacuation zone in Hawaii, you need to pack up and move out.
In a little less than three hours, about 10:38 Hawaii time, the first waves will hit Hawaii.
What areas of Hawaii? The towns of Kahului and Hilo are likely to see a succession of waves. The shorelines will be dangerous for a couple of hours. "Basically this tsunami is pointed right at us," said Gerard Fryer, senior geophysicist at the Pacific Tsunami Warning Center.
[Update 1:32 a.m.] The #PrayforCanada hashtag has become a worldwide trending topic on Twitter.

[Update 1:25 a.m.] A tsunami warning has now been issued for the state of Hawaii, the Pacific Tsunami Warning Center said.
[Update 1:05 a.m.] Julianne McCaffrey of British Columbia Emergency Management is on CNN International right now. She says officials are watching the coastal areas and ensuring people are complying with the directives of local authorities. "We've not received any reports at this time of any damage."
[Update 1:05 a.m.] The National Weather Service just issued this photo: 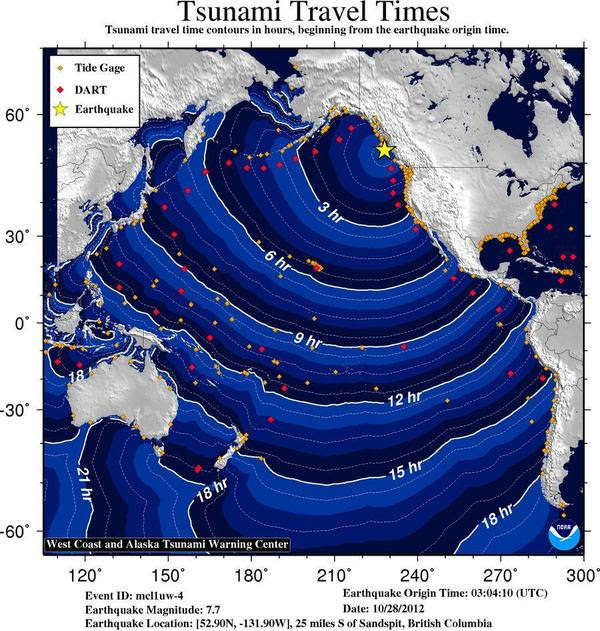 [Update 12:44 a.m.] Fryer also clarified exactly what area the tsunami warning encompasses: It is for coast of British Columbia, from Vancouver to the southern panhandle of Alaska. Hawaii is NOT under warning.
[Update 12:38 a.m.]  Gerard Fryer, senior geophysicist at the Pacific Tsunami Warning Center was just on CNN International and put the magnitude of the quake into perspective - while at the same allaying much of the concern.
"A 7.7 is a big, hefty earthquake. It’s not something you can ignore," he said. But, he added, "this earthquake was partly under the island and mostly under shallow water."
"I think we have to be thankful it happened where it did . .. if that were a heavily populated area, it would have caused significant damage," he said. "It definitely would have done significant damage if it had been under a city."
[Update 12:31 a.m.] A small tsunami has been recorded on a deep ocean pressure sensor, the Pacific Tsunami Warning Center said. The warning region remains the same.
[Update 12:23 a.m.] Julianne McCaffrey with Emergency Management BC tells CNN there are no reports of damage at this time.
[Update 12:12 a.m.] Some possible good news:

[Update 12:12 a.m.] The USGS is now reporting a second aftershock: Magnitude 4.8 about 126 miles south of Masset.
[Update 12:02 a.m.] Some coastal areas in Hawaii may feel small non-destructive sea level changes and strong currents for the next several hours, said the Pacific Tsunami Warning Center said.
[Update 12 a.m.] A 5.8-magnitude aftershock was felt 96 miles south of Masset, Canada, according to the USGS.
[Update 11:56 p.m.] More from Englehard:
He said he has not seen any major damage in his town; just a broken window. The shaking lasted for a while, he said.
[Update 11:52 p.m.] Fritz Engelhard, who lives in Masset, British Columbia, said he felt the tremor even though his town is 86 miles from the epicenter. Residents have been asked to seek higher ground because of the tsunami warning, he said.
[Update 11:47 p.m.] The tweets started populating the Twitter timeline as soon as residents felt the tremor.

[Update 11:46 p.m.] The tsunami warning is in effect for the coastal areas of British Columbia and Alaska - from the north tip of Vancouver Island, British Columbia, to Cape Decision, Alaska. Such a warning means that all residents in those coastal regions should move immediately inland to higher ground.
[Update 11:43 p.m.] The Alaska Tsunami Warning Center has issued a tsunami warning.
[Posted at 11:40 p.m.] A 7.7-magnitude quake struck off the coast of Queen Charlotte Islands in Canada late Saturday, the U.S. Geological Survey said. The quake had a depth of 10.9 miles.
Posted by intuitivefred888 at 11:05 PM