By ADAM GELLER, AP
22 minutes ago 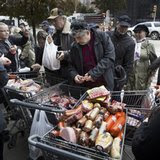 Transportation from and to PHL airport said...

Really a great blog with a best thoughts and ideas are shared thanks for sharing such an interesting article.
Transportation from and to PHL airport