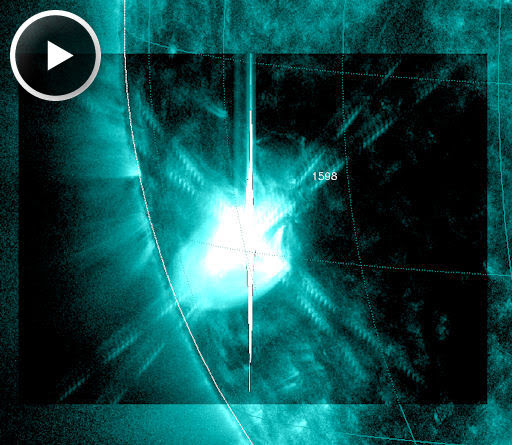 Radiation from the flare created waves of ionization in the upper atmosphere over Asia and Australia (the daylit side of Earth) and possibly HF radio blackouts at high latitudes. The blast did not, however, produce a significant coronal mass ejection (CME). No auroras are expected to result from this event.
This is the 4th significant flare from AR1598 since it emerged over the southeastern limb only three days ago. This means more flares are probably in the offing, and they will become increasingly Earth-directed as the sunspot turns toward our planet in the days ahead. Stay tuned for updates. Solar flare alerts: text, voice.

If you remember the October 4th Solar Flare hit  earth on the 8th while I was flying from Hawaii to the mainland and I got crispy fried flying back without knowing at the time the cause other than thinking, "Was there a solar flare because I really feel strange?" Sure enough, we had been hit while flying at 33,000 feet I found out later in the news.

Also, we found that Alaska Airlines (that my daughter was flying on) had all it's planes grounded for 5 hours because the Solar Blast had shut down all it's computers. We were considering buying a new ticket for our daughter on our airline when we found out that the plane for her flight was there already on the ground as flights in the air still had to get to their destinations even though the computers all were down for 5 hours. So, she just arrived at her destination about an hour late in the end.

Then last Friday night on the 19th of October we were hit again by a G1 that blew off some of the data of my Blogger site and others (but was reloaded by Sunday and Monday) and knocked satellites off the air and many others were shut down as a precaution.

Though there won't be auroras from this one there may be HF radio blackouts at high lattitudes this time.

By the way solar radiation is similar to low level radiation from a nuclear blast or from a nuclear meltdown like in Fukushima a year ago or so. Too much of it creates chromosome and potential genetic damage. However, those most likely to get too much of it are astronauts out spacewalking or pilots and cabin crew who are flying during multiple doses of solar storms. One blast like I received from flying from Hawaii is sort of like getting a cold in severity. I found myself to be very fuzzy headed for at least a week and it affected my health and resilience and remembering things. However, almost two weeks later I am beginning to recover and to feel rested again. Also, I'm 64 so that is a factor as well. Also, multiple climate changes are also a factor in a human bodies adaptation as well as a 3 hour time difference.

Also, there might be more radiation hitting earth from this latest sunspot activity in the next few days as this sunspot turns towards earth. Remember, sunspots spew radiation in all potential directions but for us to be hit here on earth we have only a 1 in 360 degree chance both vertically and also a 1 in 360 degree chance horizontally. So, since the sun is spewing stuff in all directions it has to be precisely aimed at us for us to be hit directly. However, it is also important to note that our magnetosphere has weakened since 2000 to 2005 which could be caused by the poles moving which tends to decrease a magnetosphere's protective power down to as potentially low as 10% of what protection we had  before 2000. However, though there are presently holes in the magnetosphere it is not at 10% right now(at least the part that doesn't have holes in it.)

Also, this sunspot cycle is similar to the increased activity of the cycle when the Carrington Event happened in 1859.

Also, if you click on this button: X1-class
you will notice that an X-Class sunspot solar flare is the strongest and most worrisome for computers, satellites, electrical grids etc. to be concerned about. So, be aware of this regarding accuracy regarding all computer data worldwide.