29 Tibetan Self Immolations in the Past Year 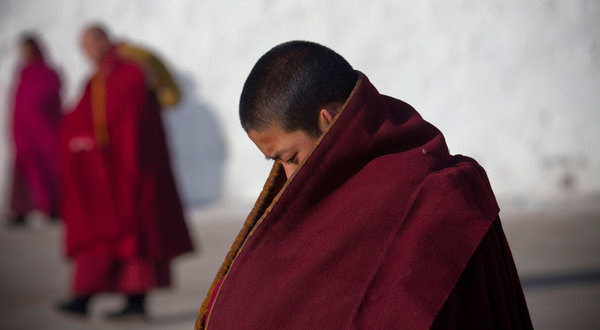 Shiho Fukada for The New York Times
Monks at the Labrang Monastery in Gansu Province, where China has tightened security.

MAQU, China — Like many children of Tibetan nomads, Tsering Kyi started school relatively late, at age 10, but by all accounts she made up for lost time by studying with zeal. 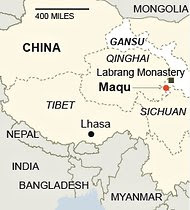 Readers shared their thoughts on this article.

“Even when she was out at pasture with her parents’ flock, there was always a book in her hand,” a cousin said.
That passion for learning apparently turned to despair this month when the Maqu County Tibetan Middle School, in Gansu Province near Tibet, switched to Chinese from Tibetan as the language of instruction. The policy shift has incited protests across the high-altitude steppe that is home to five million Tibetans and a far greater number of ethnic Han Chinese.
On March 3, a few days before the start of the spring semester, Tsering Kyi, 20, emerged from a public toilet at the town’s produce market, her wispy frame bound in gasoline-soaked blankets that had been encircled with wire, relatives and local residents said.
In a flash she was a heap of flames, her fist raised defiantly, before falling to the ground, residents said. She died at the scene.
Over the past year 29 Tibetans, seven of them in the last three weeks, have chosen a similarly agonizing, self-annihilating protest against Chinese policies. Of those, 22 have died.
Beijing, alarmed about the threat to stability in a region seething with discontent over religious and cultural controls, has responded with an assortment of heavy-handed measures. Officials have described the self-immolators as outcasts and terrorists, blamed the pernicious influence of Tibetan exiles and flooded the region with checkpoints and paramilitary police officers in flak jackets.
Communist Party leaders have also introduced a “monastic management” plan to more directly control religious life. As part of the plan, 21,000 party officials have been sent to Tibetan communities with the goal of “befriending” monks — and creating dossiers on each of them. Compliant clergy members are rewarded with health care benefits, pensions and television sets; the recalcitrant are sometimes expelled from their monasteries.
At some temples, monks and nuns have been forced to publicly denounce the Dalai Lama, the exiled spiritual leader whose name is often invoked by self-immolators. The freedom of movement that allowed monks to study at distant monasteries across Tibet and four adjacent provinces has been curtailed.
“They claim we are free to practice our religion but in fact they keep pulling the reins tighter and tighter so we can hardly breathe,” said a 22-year-old monk from Qinghai Province, who like many Tibetans keeps banned pictures of the Dalai Lama in his room and on his cellphone.
Senior officials have trumpeted the new approach, which includes the distribution of one million national flags and portraits of Mao Zedong and other party leaders — with a requirement that they be displayed at homes and monasteries. “Temples have undergone a delightful change since the new management methods were put into place,” Xinza Danzengquzha, a top Tibetan official, said this month in Beijing.
Such measures, however, may be having the opposite intended effect. Robert Barnett, director of the Modern Tibet Studies Program at Columbia University, said that the government’s more intrusive approach to monasteries, the heart of Tibetan society, is a reversal of self-management policies put in place in the 1980s. “History suggests it is unlikely to work,” he said.
The antipathy, never far beneath the surface, is erupting into plain view with greater frequency. In the past week, several protests have broken out, including two in Qinghai Province that were led by students angry over the introduction of Chinese-language textbooks for subjects like chemistry, math and geography. In January, exile groups say 31 people were shot, at least one fatally, when police officers opened fire on demonstrators in Drango County, in Sichuan Province. In Diru County, in the Tibet Autonomous Region, 20 of the 22 monasteries have been closed, according to the Tibetan Center for Human Rights and Democracy.
Spasms of unrest have coursed through modern Tibetan history with some regularity since 1959, when the Dalai Lama fled to India after a failed uprising. Between 1987 and 1989, the region was rocked by protests that were brutally crushed. The most recent crackdown began in March 2008, when rioting in Lhasa, the Tibetan capital, led to the death of at least 19 people, most of them Han Chinese. In the weeks and months that followed, exile groups say a far greater number of Tibetans died.
Next Page »
end quote from:
http://www.nytimes.com/2012/03/23/world/asia/in-self-immolations-signs-of-new-turmoil-in-tibet.html
I first became aware of Buddhist monks doing self immolations during the Viet Nam war in the 1960s and 1970s mostly in Saigon in Viet Nam. It took me a long time then to understand fully why they do this. It is taking responsibility for one's actions without being violent towards others. A Tibetan Buddhist Monk or Lama now is simply saying "What is happening is just so inhumane that my only recourse because of my vows of harmlessness towards others is to burn myself up and die in public." It is a supreme sacrifice to help others. There have been 29 such self immolations in China during the past year. Likely there will be many more until things change for the better for Tibetans. This is not likely to stop anytime soon.
Posted by intuitivefred888 at 11:52 PM

Email ThisBlogThis!Share to TwitterShare to FacebookShare to Pinterest
Labels: 29 Tibetan Self Immolations in the Past Year