Health Exchanges Have Fans in Some States

Health Exchanges Have Fans in Some States

A handful of states say they are planning to press ahead and voluntarily implement a key part of the 2010 federal health-care law even if it is wiped out by the Supreme Court.
The Obama administration's law faced three days of skeptical questions from the court's conservative majority this past week, increasing the odds that part or all of the law will be struck down. The justices met Friday for their weekly conference, where they were expected to take a preliminary vote and decide how to issue their written opinions on the case, but they aren't expected to announce their decision until late June. 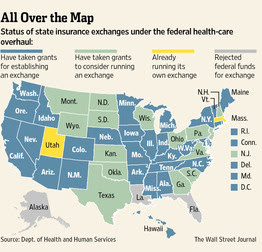 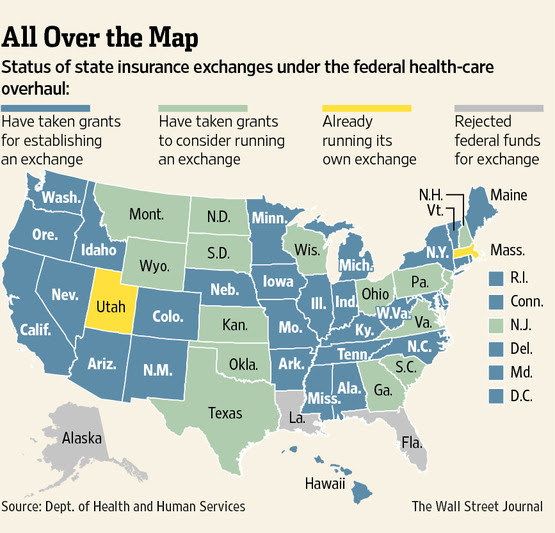 The health-care overhaul requires that all states have a new insurance exchange where consumers can comparison-shop for policies. The law calls for them to operate like travel websites that sell airline tickets, allowing people to stack up policies next to each other and get plan details in simple terms.
The exchanges, set to take effect in 2014, are one of the most popular parts of the new law. States can run their own exchanges or let the federal government do it for them.
Officials in Rhode Island, California and Colorado—states where governors are broadly supportive of the law—say they plan to move ahead with their exchanges even if the entire law gets struck down. They added that they expect the law will remain in place, and are working to meet the 2014 deadline to get exchanges up and running.
"You can crystal-ball yourself to death," said Peter Lee, the executive director for the exchange in California. "If the unthinkable became thinkable, there are members of the state legislature, there's an exchange board, there are constituents across the state who would say, 'OK, now's the time to take the next steps.' "
Lawmakers in California have floated the idea of introducing a statewide requirement for individuals to carry insurance or pay a fee. Massachusetts is currently the only state to have this requirement.

Rhode Island Democratic Lt. Gov. Elizabeth Roberts,  sees 'a role for an exchange here.'
Rhode Island officials, too, said they were pressing ahead with their state exchange and would also consider passing state-level legislation to substitute for parts of the federal law if they are struck down.
"There's a role for an exchange here…and that can happen no matter what happens with the Supreme Court," said Democratic Lt. Gov. Elizabeth Roberts, who has been overseeing Rhode Island's health-overhaul efforts.
Ms. Roberts said she had pushed legislation three years ago to create a state requirement to purchase insurance or pay a fine. She said she would be prepared to do it again, if necessary.
While states could still create their own exchanges if the whole law fell, they wouldn't get the law's federal funding to run them, or the federal subsidies designed to help lower earners buy coverage in the exchanges.
The executive director of the Colorado exchange, Patty Fontneau, said the legislation creating the state's exchange explicitly banned officials from using state funds to prop it up, and that funds from private companies or foundations might be options for keeping it going.
She said that as officials consider applications from vendors to provide the technology to run the exchange, they are discussing the importance of being able to adapt to a different landscape.
"The deadlines are so tight that we are continuing to move forward, because we have to be flexible, and we realize…we can't really stop and wait to see what happens in June," she said.
Most states have taken federal money to begin establishing their own exchanges, though they are at varying stages in the process. In all, the U.S. has given out around $730 million in set-up funds to date. A few states have turned away all funds.
Some Republican-led states, which have opposed the health-care law but have moved ahead with their exchange preparations just in case, said they would likely halt their efforts if the court overturns the law.
"We're prepared to stop at any time, or to consider moving forward," said Seema Verma, a health-policy consultant for Indiana GOP Gov. Mitch Daniels.
A spokesman for Florida GOP Gov. Rick Scott said the state would comply with the law if it is upheld, but that officials would "cross that bridge when we come to it." Florida has turned away federal money to create its exchange.
Lane Wright, the spokesman, said the governor's administration was "confident" the law "will be ruled unconstitutional, and so we're not very concerned how these exchanges would be set up."
Write to Louise Radnofsky at louise.radnofsky@wsj.com

So, the interesting thing about Obamacare is that much of it will remain and be implemented by many of the more progressive states no matter what the Supreme Court does. So, many things look like they have permanently changed to the point where many states will run their own programs no matter what they Federal Government does. And maybe this is better in the end in regard to states rights.
Posted by intuitivefred888 at 5:48 PM

Email ThisBlogThis!Share to TwitterShare to FacebookShare to Pinterest
Labels: Health Exchanges Have Fans in Some States