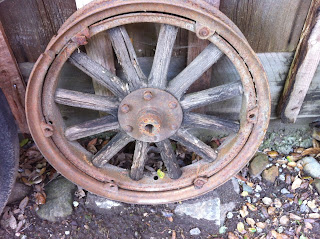 You just don't see many like this anymore. My father talked about his father having wheels like this on their touring car while traveling from Texas to California. There were no paved roads between Texas and California except in large cities. He said going across the desert they broke a spoke on a wooden wheel and put the spare wheel on. So they had spare tubes so they wouldn't get stuck without a tire and a tire pump and an extra wooden wheel in case a rut in the road broke the wheel or too big a rock or a combination broke the wheel or punctured a tire. When it rained it wasn't usually a good idea to travel unless you were on a graveled or rocked road because you would get stuck. This was about 1915 and probably before to 1925 when my Grandfather rode on Wood spoke wheels. Somewhere around Arizona they broke a front spoke wheel so my Grandad stopped to put a new wheel on that was tied onto the trunk of the car. The dogs rode on the running boards (they tied them on) so they wouldn't mess in the car back then because they were outdoor dogs and mostly to hunt with so were not housebroken. My Uncle was 4 years old and went and stood over  on a large red ant hill and his screams when they bit him all over drew everyone to save him. Where they lived in Oregon and Washington and Texas I don't think they had the large red ants that will attack humans sort of like bees if you are near their hives. I myself, when I was 4 had this same experience in El Cajon, near San Diego, because they didn't have ants like this in Seattle where I had come from either. It is so painful that it only takes one time to learn the lesson of the large red ants of California and Arizona and possible a couple of other areas as well. My father said that the alkali dust roads were so bad that only the driver wasn't crying from eye irratation and it also created sores in your mouth from the dust that it took about a month for all the sores in your mouth to heal from all the dust. Only the driver, my Granda who had goggles on didn't have eyes watering from the alkali roads. And everyone had the mouth sores for over a month after they reached California likely in the early 1920s. I found this wood spoke wheel in Big Sur on the coast of California next to the rest room. It is near the Shell Station($5.99 a gallon for premium) today in between the River Inn and the Post Ranch and Ventana Ranch. If you want to see more wooden spoke wheels go to google images and type in: 'Wooden Spoke wheels'.
Later: I was talking with my son about wooden spoke wheels on cars and trucks. They were a natural outgrowth of mostly wooden wagon wheels. On very rough roads wooden wheels absorb more concussions at slow speeds than light enough metal to build with could in the early 1900s. Also, my father told me that no one drove over 25 mph ever on the rough roads over most of the country because if you did it would completely destroy your vehicle. So, all metal wheels that you started to see likely in the early to late 1920s on the more expensive cars were not usually driven over bad dirt roads because it would destroy the vehicle. So, even if you were going across the country you needed a more truck like vehicle to survive the terrible mostly unpaved roads outside of the cities. So, most vehicles that people did this with resembled more the SUV's of now more than anything else. However, 4 wheel drives were not very common back then except maybe in some trucks.

CIRCA 1920 NASH QUAD 4 FIRE TRUCK
This was a four wheel drive truck from: http://www.ci.chippewa-falls.wi.us/Departments/Fire%20Emergency/History.htm

So, the touring car that my Grandfather drove from Texas to California was likely a big Dodge that could hold his wife and three or 4 kids (there were eventually 5) and their two hunting dogs (on the running boards) and whatever clothes and goods they brought along that they didn't ship by railroad. In emergencies a group of men would go to rescue people or put out fires by getting 4 or 5 men on each running board and heading off at 10 to 25 mph in emergencies. Also, if one rode the running boards while going through fence gates he or she could open the gate so no animals got out, let the vehicle through and then close the gate and then hop on the running board until the next gate so the cattle or other herds didn't get out past the fences.

Also, most places didn't have ambulances back then and a doctor might be 50 miles away for many many people. So, unless you could take care of yourself and anybody else around sometimes you just didn't survive at all. Under those circumstances a snake bite, a broken arm or having a baby might be fatal as often as 50 percent of the time if you were that remote. And also, in 1900 only 1 person in 12 lived to be 60 years old. And this was an average  that included the whole the U.S. The larger black 6 passenger (or more) vehicles among those below with wooden spoke wheels likely is what my grandparents and father drove from Texas to California and eventually to Oregon and Washington in. The top 4 are from 1917 and the bottom 4 are from 1924. I found wooden spoke wheels on some Dodge vehicles in pictures up to about 1927 or more recent.

Below is a copy of an original 1920 Dodge Brochure for sales of this Dodge. It is free to  print out from the "Old Car Manual Project" at:http://www.oldcarbrochures.com/static/NA/Dodge/1920_Dodge_Brothers/1920%20Dodge%20Brothers.html

Email ThisBlogThis!Share to TwitterShare to FacebookShare to Pinterest
Labels: Wooden Wheels on Cars before 1925 or 1930

It is warped because the outside ring would get hot... Wheel was designed to float without tires. induction current. Als kept racers from getting electrocuted in the vehicle from the track.