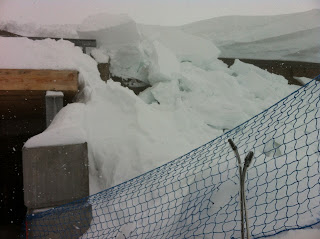 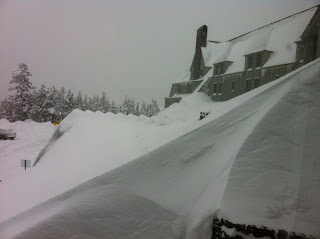 Top photo: Ski lodge roof with 4 to 5 feet of snow on it after workmen were trying to get it off. When each chunk of snow 100 to 300 pounds or more came down it sounded like a muffled explosion. All this snow fell while we were there. It snowed continuously 24 hours a day for 48 hours.

2nd photo is of a half buried Timberline Lodge. Snow plows had to work continuously to keep the roads open so people could even use the parking lot for 48 hours straight. So, for me this was a really cool experience! The temperatures ranged during the daytime between about 10 degrees and 37 degrees Fahrenheit. The elevation is 5900 feet up Mt. Hood At Timberline Lodge. Here is a word button for it:

My description of what it was like while we were there would be: "The North Pole with Trees" but that's just me. However, for me that was a really good thing. Old fashioned historical luxury that reminds one a little of the Ahwahnee  Hotel in Yosemite National Park but not as big as either the Ahwahnee or the Yellowstone Lodge in Yellowstone. It was one of the most amazing experiences of my life to be at 5900 feet with 3 to 4 feet of snow which came down out of the sky continuously while I was there.  There are ski lifts above and below the Timberline Lodge(however, the above Timberline Lodge lifts are only open later in the spring when weather is permitting) which was great for my daughter and her boyfriend who snowboard and my son and I who downhill ski and cross country ski. However, my son hadn't skied in quite a few years now because he has been getting his degree. So, it took him some time to psyche up for the terrain because he is mostly used to metal edged cross country skis which is a slightly different experience. So it was his very first time on Parabolic Downhill skis. When I first converted over to parabolics about 10 years ago now I almost killed myself on a Black diamond run and slid about 200 feet and almost into a tree before I got used to the over steering or over turning quality of parabolic skis a few years ago now.

I spent some time making sure my son was getting used to these kind of skis before I went off on my own to explore the snow terrain. When you are in a new Ski Park in a blizzard with a whole lot of powder snow coming down there are a whole lot of new variables to get used to. For me, the biggest thing was just how hard it is at age 63 to get up out of the powder when you crash as you are very likely to if you have never before skied in this place in your entire life. So, it snowed basically all day and all night and then all day and all night until the next day before we had to say goodbye and move towards home once again. But if you want a really memorable experience almost any time of year and stay in old fashioned luxury like you just don't see almost anywhere anymore Timberline Lodge is at its rustic mountaineering best. Also, many people start their climb of Mt. Hood from this location as well. I enjoyed looking out the window of my hotel room watching snowboarders and skiers going by on their boards and skis. What a really memorable time!

When I left there it was a whole lot of powder without a whole lot of people there to enjoy it. So, I felt safe to have fun and even to crash without worrying much whether someone would run me over. So, it was amazing!

One more thing my size 15 1/2 ski boots were the most comfortable I have rented anywhere. Usually I have to make do with a tight 14 most places. So, I was really comfortable with my great rented skis and boots and new ski pants. Only my jacket got wet from the falls. Great skiing!
Posted by intuitivefred888 at 4:48 PM