Tibetan Self Immolation in Delhi, India 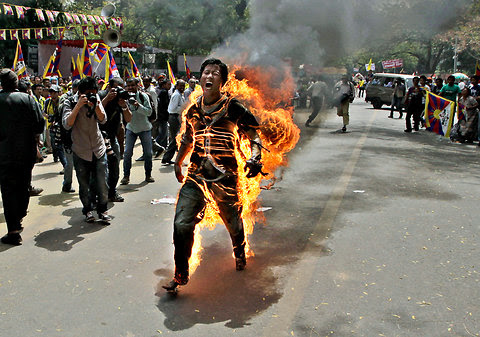 Manish Swarup/Associated PressJampa Yeshi, a Tibetan protester self-immolated in New Delhi, ahead of Chinese President Hu Jintao’s visit to India.
A protest march in New Delhi took a dramatic turn after a Tibetan exile self-immolated Monday afternoon.
“From head to toe, he was full of fire,” said Dorjee Tseten, the national director of Students for a Free Tibet, who  witnessed the act.
The exile, Jampa Yeshi, who is believed to be 26 years old, set himself on fire at Jantar Mantar, the site of frequent protests, at 12:25 p.m., shortly after a Tibetan rally made its way back from Ramlila Maidan, another popular ground for political demonstrations in New Delhi. The protesters were agitating against the India visit of Hu Jintao, the Chinese president, for the BRICS Summit, an economic meeting of Brazil, Russia, India, China and South Africa, later this week.
Leaders of Tibetan groups said Mr. Yeshi had not told anyone he planned to set himself on fire. “It’s not planned by any organization,” said Tenzin Norsang, joint secretary of the Tibetan Youth Congress, who was leading the protest. But, he said, “we appreciate his courage.”
Mr. Yeshi was rushed to Ram Manohar Lohia Hospital minutes after setting himself ablaze. Witnesses said that he was severely burned and that his scorched flesh was peeling off. Mr. Yeshi set himself afire behind one of the gates at Jantar Mantar and then streaked past the podium in a ball of fire and crumpled under a tree on the road in front of the protesters, they said. The police and Tibetan activists then rushed forward with clothes and water to douse the flames.
“He was shouting. I was in shock. There were women crying,” Mr. Tseten said. “It was very emotional. I don’t know what it would lead to in the coming days.”
Activists said that Mr. Yeshi, who left Tibet a couple of years ago, self-immolated while Inder Singh Namdhari, a minister in the lower house of Parliament, was speaking at the podium about the high number of self-immolations in Tibet.
Over the past year, about 30 Tibetans in Tibet have set themselves ablaze to protest Chinese rule in Tibetan areas. Of those, many of them monks and nuns, 22 have died.
In India, Mr. Yeshi, whose first name has also been spelled as Jamphel and Jamyang, is the third protester to self-immolate. In 1998, Thupten Ngodup self-immolated at the same spot, Jantar Mantar, and died later. Another protester suffered minor burns after setting himself alight outside the Chinese Embassy a few months ago.
“This is a call for the international community that Tibetans need their support,” said Mr. Tseten.
India is home to an estimated 120,000 Tibetans, including their spiritual leader, the Dalai Lama. On Monday, hundreds of Tibetan supporters thronged Jantar Mantar. After Mr. Yeshi set himself on fire, they proceeded to march toward the Chinese Embassy to protest Mr. Jintao’s impending visit and draw attention to the self-immolation crisis.
Protesters said they were not against the BRICS Summit, just Mr. Jintao’s attendance.
“What we want? We want freedom,”  the protesters chanted as they wound their way through the streets, waving Tibetan flags.
“Who’s the killer? Hu Jintao.”
Some protesters also held placards over their faces – with the words “Hu Jintao is unwelcome” and a picture of a bloody hand smacked on the Chinese president’s face – to stave off the afternoon heat.
The police, however, stopped the protesters before they reached the Chinese Embassy, saying they could not continue because of their proximity to the Indian Parliament, which was still in session. Demonstrators settled down on the pavement at the mouth of Sansad Marg as Mr. Norsang, the protest leader, negotiated with the police.
“We will go peacefully, sir,” said one protester to the police officers.
The police officers were losing patience.
“Go to Jantar Mantar or be prepared to face the hostility of the Indian police,” an officer told Mr. Norsang.
The protesters remained seated, with the police, in helmets and shields, lined up next to them.
Mr. Norsang said that the protesters were willing to be arrested if they were not allowed to go the Chinese Embassy but maintained that he was trying to hold a peaceful rally. He said the agitators would wait at the spot until they received permission but that they would definitely protest outside the embassy.
“Hu Jintao’s policy is responsible for self-immolations,” said Mr. Norsang. He’s “unwelcome here.”

Strangely enough when I look at this definitely in the most pain this man has ever experienced man it reminds me of "The Hunger Games" when Catniss wears flames in the Arena. The Tibetan Experience likely is not too different than Catniss' relatives in Area 12. And the experience of Catniss  as a Volunteer also reminds me of this 26 year old Tibetan who is literally burnt up by the plight of his people.
Posted by intuitivefred888 at 11:21 PM

Email ThisBlogThis!Share to TwitterShare to FacebookShare to Pinterest
Labels: India, Tibetan Self Immolation in Delhi