From Wikipedia, the free encyclopedia
Germanwings Flight 9525 (4U9525/GWI9525)[a] was a scheduled international passenger flight flying from Barcelona, Spain to Düsseldorf, Germany, operated by the Lufthansa-owned low-cost airline Germanwings. On 24 March 2015, the Airbus A320-200 jetliner crashed around 100 kilometres (62 mi) northwest of Nice, in the French Alps. All 144 passengers and six crew members were killed. 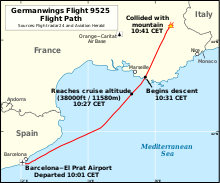 Altitude chart (m)[7]
The French aviation authority Direction générale de l'aviation civile (DGAC) declared the aircraft in distress after the aircraft's descent and loss of radio contact.[8][9] The aircraft reached a cruising speed of 430 kn (800 km/h; 490 mph) and an altitude of flight level 380 (approx. 38,000 ft [12,000 m]) at 10:27 CET. Three minutes later, the aircraft speed increased, reaching 515 kn (954 km/h; 593 mph) after 20 seconds. According to the BEA, at 10:30 CET, pilots confirmed instructions from French air traffic control. At 10:31.02 CET, after crossing the French coast near Toulon, the aircraft made a slight course correction, left its assigned cruising altitude and without approval began a rapid straight-line descent. Radar observed an average descent rate of approximately 17.8 metres per second (3,500 feet per minute). Attempts by French air traffic control to contact the flight on the assigned radio frequency radio link were not answered.[10] A french miltary Mirage jet was scrambled to intercept the plane after it failed to respond ro air traffic control.[11] The reason for the descent is unknown. The aircraft speed decreased slightly during the descent, reducing from 480 to 428 kn (889 to 793 km/h; 552 to 493 mph). The aircraft crashed within the territory of the remote commune of Prads-Haute-Bléone, about 100 kilometres (62 mi) north-west of Nice.[1][12][13][14] Radar contact was lost at 10:40.47 CET; at the time, the aircraft was flying at an altitude of 6,175 ft (1,882 m).[15] Flightradar24 recorded its last update at 09:40:36; the plane's location was lat44.234 lon6.407 altitude 6800 ground speed 378 vertical speed -3520.[16]
The crash is the deadliest air disaster in France since the crash of Inex-Adria Aviopromet Flight 1308 in 1981, in which 180 people died.[17] This was the first major crash of a civil airliner in France since the Air France Flight 4590 Concorde crash near Paris in 2000.[18]

The crash site is within the Massif des Trois-Évêchés, and is close to Mount Cimet, where Air France Flight 178 crashed in 1953.[19][20]
Police and Sécurité Civile sent helicopters to locate the wreckage.[21][22] A picture from the accident site was released, with the report that the aircraft had disintegrated, the largest piece of wreckage being "the size of a car".[23] According to French Prime Minister Manuel Valls, a helicopter which landed near the site of the crash confirmed that there were no survivors.[24] The search and rescue team reported that the debris field is two square kilometres (0.77 sq mi) in size.[13] The plane appears not to have deviated from its flight plan during its descent.[25]
The French Aviation Authority has set up temporary flight restrictions in the area surrounding the crash site.[26] The prohibited area was first set on 24 March at 11:47 GMT (12:47 CET); a circle of 3 nautical miles (5.6 km) radius centered at 44°16′50″N 6°26′25″E from FL000 up to FL140.[27] At 13:38 GMT (14:38 CET), a second larger area was added to cover a radius of 10 nautical miles (19 km; 12 mi) centered at 44°16′48″N 6°26′24″E from FL000 to FL100.[28] Entry into the airspace is forbidden, except for state flights or for rescue missions.[29]
Rescue efforts were suspended overnight by the French authorities to ensure the safety of the rescuers.[30] Several gendarmes were posted to guard the crash site through the night.[31]

Some of the passengers were German students returning from a school trip. There were 144 passengers and six crew members on board, most of them German and Spanish nationals[36] but from at least 18 nations in total. The count may be confused due to dual citizenship.[56] Amongst them were 16 schoolchildren and two teachers from the Joseph-König-Gymnasium, Haltern am See, North Rhine-Westphalia. They were on their way home from a student exchange with the Giola Institute in Llinars del Vallès, Barcelona.[57] Haltern's mayor, Bodo Klimpel, has described it as "the darkest day in the history of our city."[58]
A Germanwings representative announced that the captain had 10 years of flying experience (6000 flight hours)[1] with Germanwings and Lufthansa.[59]
The Deutsche Oper am Rhein confirmed that bass-baritone Oleg Bryzhak was among the passengers,[60] as were German contralto Maria Radner, her husband and infant.[61] Members of the Dalkurd FF football team were booked to be on the flight but changed at the last moment.[62]

The French national civil aviation enquiries bureau, Bureau d'Enquêtes et d'Analyses pour la Sécurité de l'Aviation Civile (BEA), has opened an investigation into the crash, joined by its German counterpart, the Federal Bureau of Aircraft Accidents Investigation (BFU). On 24 March, the BEA sent seven investigators to the crash site, accompanied by representatives from Airbus and CFM International. The BEA will hold a press conference on 25 March from 16:00 to 16:45 UTC.[63][64]
The cockpit voice recorder (CVR) was recovered by rescue workers and is being examined by the investigation team.[65][66] The recorder was damaged in the crash, but was said to be still in a "usable" condition.[25] BEA released photos of the CVR[67] and was able to extract data. A usable voice recording was extracted.[68]
The outer casing of the missing flight data recorder was found the next day, but was severely damaged and missing its memory module.[69][70]
The BEA press conference on 25 March confirmed the times, route and altitude, during the final descent of the aircraft, previously given by Flightradar24.[71][citation needed]

The French Minister of the Interior Bernard Cazeneuve remarked that due to the "violence of the impact" there was "little hope" that any survivors would be found,[72] and French President François Hollande called the crash a tragedy.[17] Prime Minister Manuel Valls said he had dispatched Interior Minister Cazeneuve to the scene and set-up a ministerial crisis cell to co-ordinate the response to the incident.[73]
King Philip VI of Spain, in Paris for a state visit to France at the time of the crash, announced his decision to cut his visit short and return to Spain.[36]
German Chancellor Angela Merkel announced that she would travel to the crash site on 25 March together with Minister-President of North Rhine-Westphalia Hannelore Kraft.[74][75] Foreign Minister Frank-Walter Steinmeier flew over the crash site on 24 March, describing it as "a picture of horror".[73]
Lufthansa Chief Executive Carsten Spohr said before visiting the site of the crash that it was a "dark day for Lufthansa".[12]
Germanwings reported occasional flight disruptions within its route network due to crew members deciding not to operate aircraft following the accident. As a result some flights had to be cancelled.[76]
On 25 March, Germanwings retired the flight number 4U9525, changing it to 4U9441. The outbound flight number was also changed, from 4U9524 to 4U9440. The flight numbers for the later Düsseldorf to Barcelona flight were unchanged.[77]