First Case of Cholera in Florida from Haiti

Case of Cholera in Florida Is Linked to Haiti Outbreak

Here's something that you don't see every day. The first Cholera victim in Florida from Haiti. Remember when Cholera was something you only saw in Africa or Asia? Well. That's not true anymore in present bad economic conditions worldwide. Let's hope it doesn't get beyond Florida into some of the other 50 states. Cholera is extremely contagious  by either feces or by coughing or mucous transfer from sneezing I understand. 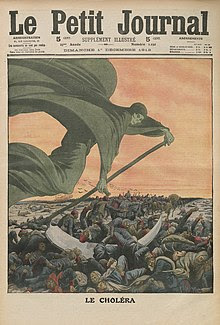 Drawing of Death bringing the cholera, in Le Petit Journal
Cholera is typically transmitted by either contaminated food or water. In the developed world seafood is the usual cause while in the developing world it is more often water.[1] Cholera has been found in only two other animal populations: shellfish and plankton.[1]
People infected with cholera often have diarrhea and if this highly liquid stool, colloquially referred to as "rice-water," contaminates water used by others transmission may occur.[7] The source of the contamination is typically other cholera sufferers when their untreated diarrhea discharge is allowed to get into waterways or into groundwater or drinking water supplies. Any infected water and any foods washed in the water, as well as shellfish living in the affected waterway, can cause an infection. Cholera is rarely spread directly from person to person. Both toxic and non-toxic strains exist. Non-toxic strains can acquire toxicity through a lysogenic bacteriophage.[8] Coastal cholera outbreaks typically follow zooplankton blooms, thus making cholera a zoonotic disease. end quotes.

It also said that 3-5 million people a year are affected by Cholera on earth and that 100,000 to 130,000 deaths occur yearly on earth. It is expected by health professionals that 200,000 in Haiti will eventually get this disease. However, most of them will recover if treated within the first few hours of infection. The longer one goes without treatment the more likely they will die or have serious complications.
Posted by intuitivefred888 at 11:57 PM

Email ThisBlogThis!Share to TwitterShare to FacebookShare to Pinterest
Labels: First Case of Cholera in Florida from Haiti