For those of you who read "Yesu"

For those of you who have read or who will read "Yesu" whose address is listed above: I realized that I made a spelling and historical error that I would like you to note: Scimitar is misspelled "Simitar" and the other historical inaccuracy is that they were first used in the 9th Century. It says at Wikipedia under the heading "Scimitar" the following quote:

The word "scimitar", known in English since 1548, derived from Middle French cimeterre (15c.) or from Italian scimitarra, a term of uncertain origin. Perhaps the source is Persian shamshir, but the OED finds this explanation "unsatisfactory".

Scimitars were used in horse warfare because of their relatively light weight when compared to larger swords and their curved design, good for slashing opponents while riding on a horse. Mongols, Rajputs and Sikhs used scimitars in warfare, among many other peoples.
Many Islamic traditions adopted scimitars, as attested by their symbolic occurrence, e.g. on the Coat of arms of Saudi Arabia.
The earliest known use of scimitars is from the 9th century, when they were used among soldiers in the Khurasan region of Persia.[1] 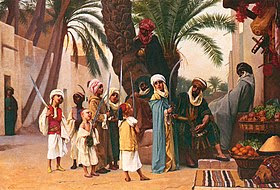 Arabs with scimitars from Boulanger's painting A Tale of 1001 Nights
The character Yellow Robe in Journey to the West used scimitar(s). In the film The 13th Warrior, Antonio Banderas' character Ahmad ibn Fadlan makes a scimitar out of a viking sword after finding it too heavy.

Email ThisBlogThis!Share to TwitterShare to FacebookShare to Pinterest
Labels: For those of you who read "Yesu"