Why has the Colorado River been considered the most Violent large River in America?

I think the first indication of this is the "Grand Canyon" because no other large river in the U.S. has carved anything like this anywhere else in the U.S. at the very least. Other reasons are that there is desert a good part of the journey from the top of the Continental divide where the tributaries of the Colorado River start is quite an altitude drop to say the least on it's way to the Pacific Ocean. Then as it travels a lot through desert (which is unusual for almost any river) you have things that can be dealt with all along the way like Flash Floods where many unwary or unsuspecting people, animals, brush, plants rocks trees are swept away when there isn't enough vegetation in deserts to hold back or send the water underground where it just flows sometimes 5 to 10 feet deep along the surfaces of the landscape for miles at a time. I have had scary experiences myself with flash floods where I had to outrun them with my car in the desert myself or I wouldn't be here today either. Luckily I had a paved road in the right direction away from the flash flood. So, this river at times is very wild and very dangerous indeed along with all rivers, streams and "dry" washes west of the Continental divide all the way sometimes to the Pacific Ocean or Baja California whichever comes first along western waterways.

Books Featured In This Story 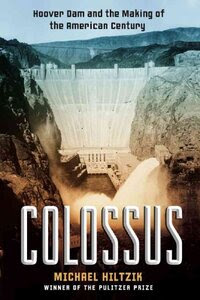 Hoover Dam and the Making of the American Century

More on this book:
end quote from:

Email ThisBlogThis!Share to TwitterShare to FacebookShare to Pinterest
Labels: A Concrete ' Colossus': The Hoover Dam At 75 : NPR

Email ThisBlogThis!Share to TwitterShare to FacebookShare to Pinterest
Labels: Why has the Colorado River been considered the most Violent large River in America?